I was determined that this show I was going to be prepped early and get to bed at a decent time. Well, I got Roscoe's stallion bride cleaned and the brass shined the week before and his halter done during the week. The surprise addition of Comrade meant I had to ask her to clean his bridle and get him clipped. I ended up having to ride with a dirty saddle pad, but I could live with that.
Friday I took off work to get everything done. I loaded as much as I could preload and still ended up forgetting my jacket at home. I even had my sister helping me do normal barn stuff. By 2pm the rain started which meant no bathing at my barn. Luckily Roscoe was spending the night at Peggy's and she has an indoor wash rack. We loaded Roscoe with only a little coaxing needed and  headed out.
Roscoe acted like Peggy's barn was completely foreign and scary. The dodo was born there, sheesh. I decided to bathe Comrade first and give him time to settle. He of course had to posture at Comrade over the stall wall. What I liked was that Roscoe was the one to back away. Not the dominant one here. While we worked on Comrade, I let Roscoe into the sacrifice area outside her stalls. I had to keep an ear out because Peggy's 30+ year old Anglo Arab is stud-y and I did not want them getting into it. Roscoe did eventually find Sonny, but again he was the one dominated. He also found someone just as mouthy as him. Both of them had a blast playing and biting at each other. Roscoe did walk away with a small, skinned area on his nose. Ah, boys.
Roscoe sort of cooperated for his bath, though he tested my sister all during it. Then I double braided  his tail and using baling twine to tie it up for the night. We tucked them in and crossed our fingers they would stay clean. I almost think a lot of chrome is worse than having a gray. 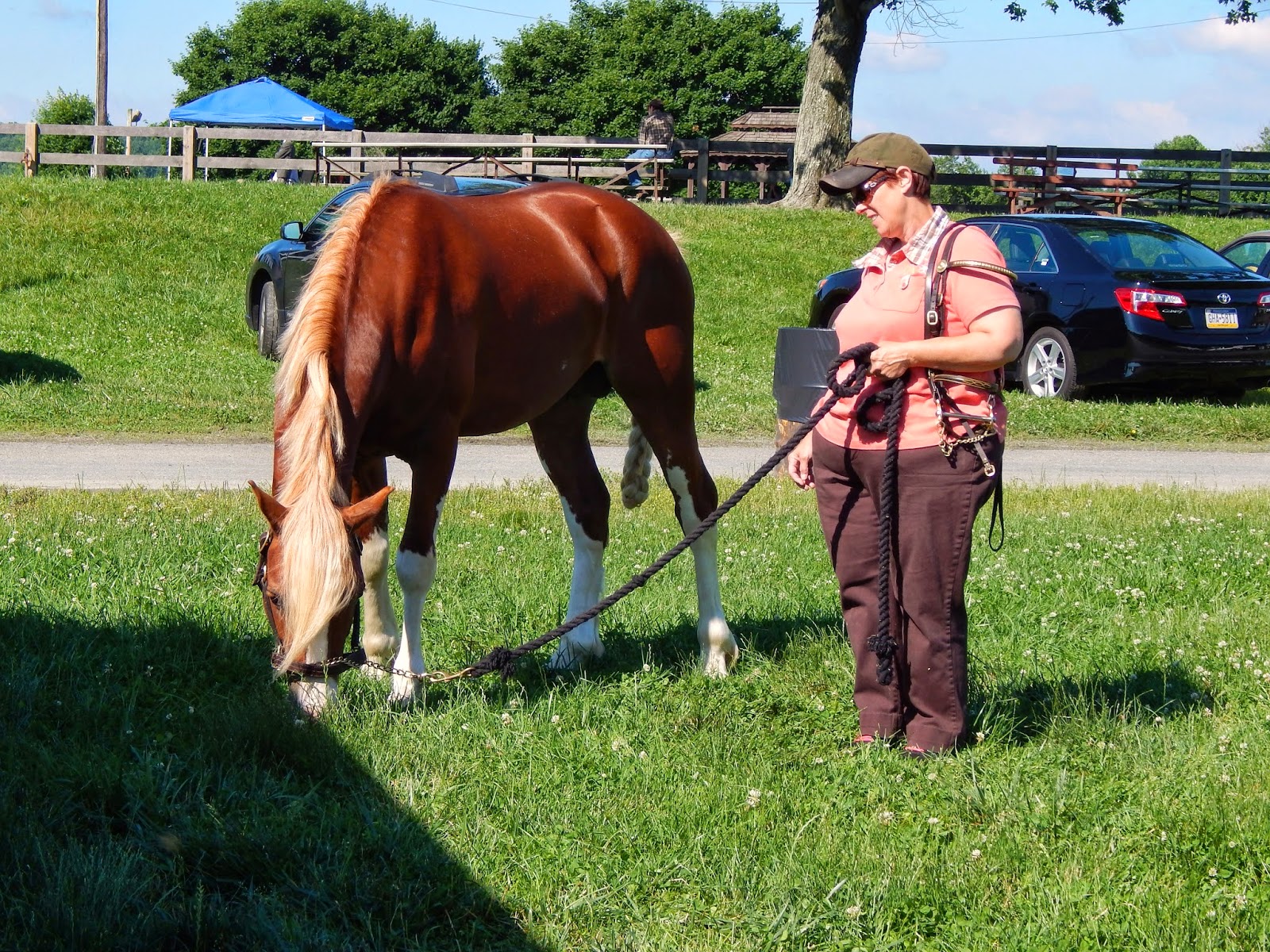 I was homeward bound by 530pm. Perfect. That gave me time to prep the cooler and get the last bits I needed together. Well that plan was lost as the clock ticked away as I waited for my Dad to come home with the food and drinks. Turns out there was massive traffic and it took an hour and a half for him to get home. Which in turn means my Mom would be even later. So not good with a 2am wake up looming. When I finally made it to bed, I set my alarm clock for the time but set for PM. Yep, for the first time ever on a show day I overslept. I woke up at the time we were suppose to be leaving Peggy's for the show. But it gets better.
Peggy and Lisa had started getting the shipping boots on the boys by time we arrived. So it was just a matter of loading and going. Mom and Peggy took the trailer while Lisa and I followed in her car. Lisa had to stop for gas and figured we would catch up somewhere during the 2 1/2hr drive. That never happened though. We pulled into the show grounds and found... No Trailer. Uh, what? I called Peggy and she said they were 10min away. So 30min later I called them again and she said the word you never want to hear, LOST. I walked over to the secretary who lives in the area and had her try to help get them straightened out.
Fortunately when they arrived both boys were still really clean with only a little bit of spot cleaning needed. We got Comrade ready and had to deal with Roscoe's over stimulation. And it figures it turned into a hurry up and wait type of deal. The weather was great and we could breathe. To help Roscoe we decided to put him back on the trailer until it was his turn. He thought that was okay. We did have to shut his door when he got excited over his cute neighbor. 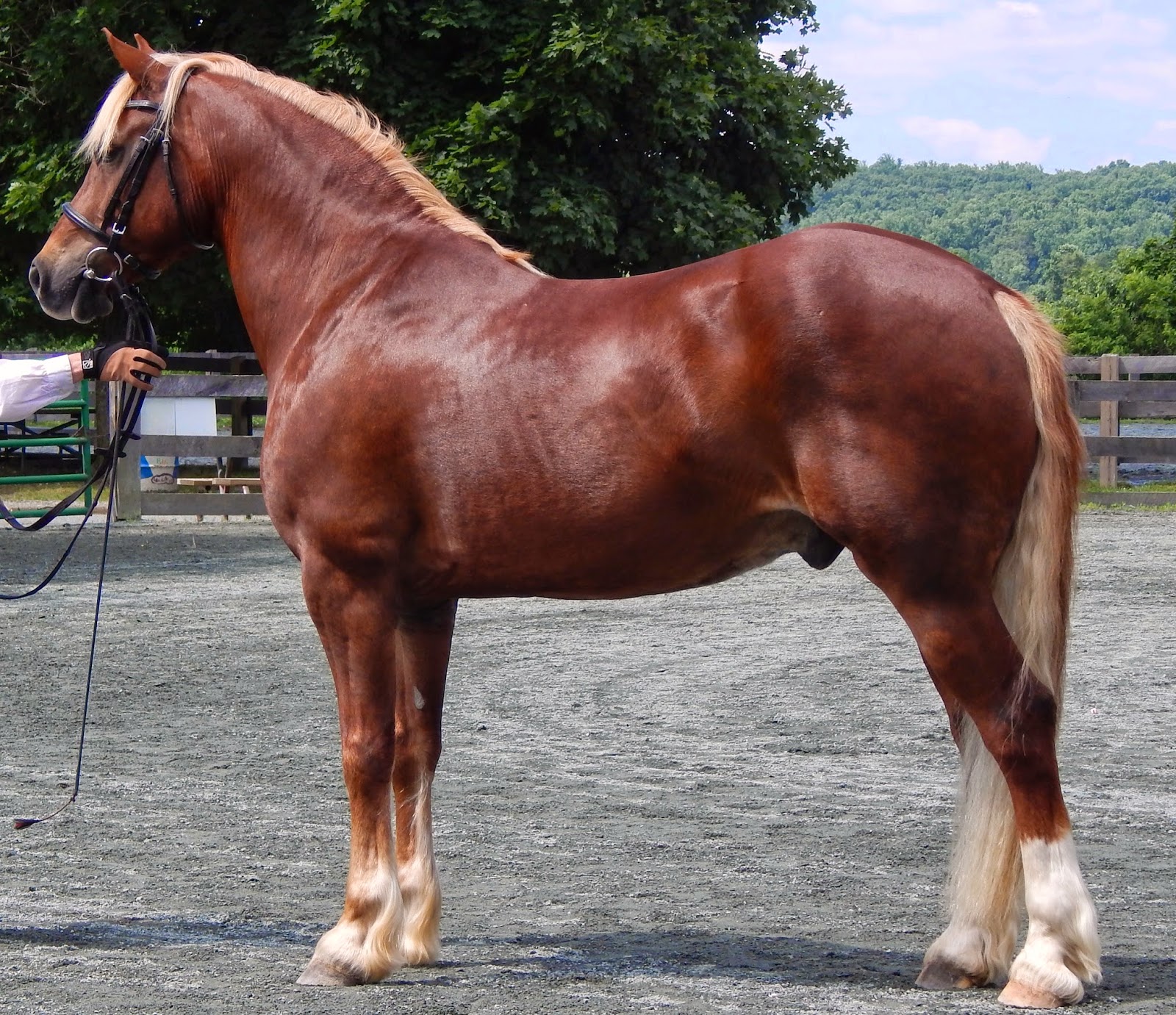 Now the actual class. This show did all the geldings at the same time, which was great.

Comrade actually had competition. The class was Comrade, chestnut (D, 14.2h, VA), Black Cob (D, 15.1h, MI) and Victory, palomino roan (C, 13.2h, MD). Talk about cool to see the three of them. I was not sure about Victory, especially his color, but I met him later an he was pretty neat. The Black Cob was a great mover (driving pony too), but his head was a bit to draft like for me. Comrade took champion under both judges and the Black Cob took reserve. Neither went supreme, though.

By time Comrade was done, Mom had Roscoe's bridle on and was ready to unload him. He came off and Comrade went on. Roscoe was not thrilled with his bit, I think because we tightened the lead chain so it would not slip over his chin. I told Lisa to leave his head loose and just ask for trot. His natural movement will show itself off. Plus these judges barely spent any time watching before moving to the next horse.

Roscoe went in first, followed by Winterlake Tristan (half brother to Alanna's girl). He is a 7yr palomino C who competes upper level dressage and what ever else his owner asks him to do. Roscoe knew he was a more dominant stallion and spun around when he trotted up behind him.

Lisa was thrilled because Roscoe poofed up and postured, but looking on I thought he tucked up too much. I wish I could suck in my tummy to that extent. Anyway, the judge asked how old Roscoe was. Mr. Man turns 3yrs old June 19th. He still looks immature, but boy did he look bigger. Not surprising, Tristan took the class.

Neither of them went Grand, though. That means Roscoe was done for the day and the wait began for the performance classes.
As nice as the day was, we left the boys on the trailer. Mom said when one tried to sleep, the other would reach over and playfully nudge. So proud of these two.

So now I get to say Happy 3rd Birthday Roscoe and Happy 7th Birthday to his sire, Ffame. This day certainly brings wonderful animals to us as they share the date with Barry and our old Corgi, Kayla. Gone but never forgotten :)

Stay tuned for Part 2. It was just as exciting. If you have seen the pictures on FaceBook you have some idea, but I will also share the videos with commentary from the peanut gallery.,
Posted by Nicole at 12:30 AM