We Had To Say Goodbye

Little did I know I would walk into a nightmare after work tonight. My head full of plans to ride Roscoe as I pulled up to the barn, I noted Larry out in the field talking to Sonny. Then as I walked to the barn, Peggy came out and said "We're about to lose the Old Man." We both began to cry. And then I looked down to see a butterfly sitting on my chest. I knew even if the worst happened, we would be okay. 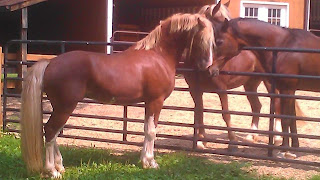 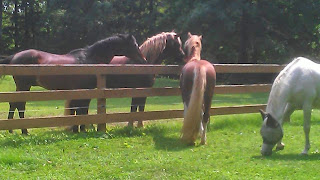 Peggy told me the vet was coming and maybe there was hope. I looked over to see him moving, kind of tottering across the field with his head down. I heart sank. Sometimes you just know. The vet came and did a rectal and found his parts were displaced, like his spleen. Very limited gut noises and flank watching pointed to colic. Plus he was dehydrated. So she tubed him, very nicely done too, and gave him fluids with epsom salts and electrolytes. We worried as his pain returned quickly after one, then two doses of sedation. After watching Sherman and Rebel react similarly, my hopes waned. The vet did another rectal and found an impaction in the ceacum. Not good :( At 32 years old Sonny is not a surgical candidate and this kind of colic normally results in surgery. The next option was to bring him to the clinic, but Sonny was not a fan of strangers. So that seemed to be an option that would stress him more. Come what may, his battle would be at the farm. We knew that if his pain continued, he would need to be put down. It was a heartbreaking decision, but the right one. I felt helpless as I supported Peggy and stood by Sonny. He was awesome, listening when I asked him to stay standing. I made the calls to my family as Peggy informed Larry. We waited and watched. At one point, Peggy heard a gut noise on the right side which before had been silent. A glimmer of hope.
Meanwhile the other horses were quiet, gently touching each other. Sonny watched the Red Boys and ruffled the grass. Then weirdly he picked up a stick and it was hard to get it away from him. Peggy said he only picked up sticks to play with Bingo, his funny friend. Peggy fed the horses dinner and Sonny moved into his stall. The wait was hard. 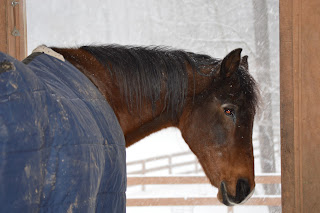 Then he began flank watching again. And that made the decision final. We had to say goodbye. Peggy wanted so much for the vet to tap his nose and make him all better, but as the vet said "She left her wand at home." So Peggy called the back hoe owner, while the vet prepped Sonny. We led him out to his spot near by Bingo's grave. All the horses watched and Roscoe trotted the fence line. Sonny went quick and joined the herd over the rainbow.
Now we have a hole in the barn where he was supposed to be forever. I so wanted to see his reaction to Roscoe's foal, but now he will see from above. Who knows he may be meeting before they even arrive. It was so hard to let my friend who sold Sonny to Peggy know he was gone. Sonny was a wonderful old gentleman  and will be sorely missed.
Posted by Nicole at 11:57 PM

Email ThisBlogThis!Share to TwitterShare to FacebookShare to Pinterest
Labels: Sonny