I'm Changing His Name to Molasses

I think, just maybe, we might be on the right side of this horrible cold now. Hopefully, I can start getting everyone back into work. Rosemary has put on too much weight and could possibly give birth at any moment. Until she is working steady, she gets to spend the night in a stall with only her hay net. Ah well it lets the older horses have less competition for the good hay.

Anyway I have wanted to try ponying Ember, but needed to have an extra set of hands. Finally yesterday Peggy was available, so we nominated Comrade to be the babysitter. I started out with Ember to Comrade's right. Ember made baby faces so Comrade would not eat him and Comrade wondered why he was stuck with an extra attachment. At first Ember walked next to us, but gradually he lost ground. Seriously?? That baby has long legs and a huge walk. Nope I kept after him to keep up. Bless Comrade for not taking offense to the slacker. 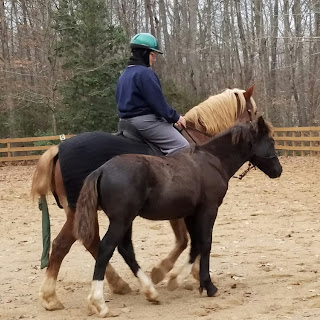 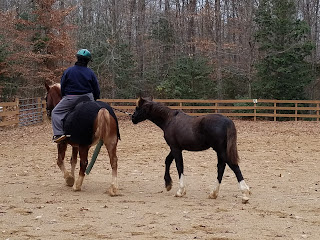 I have to deal with this walking him in hand too. I think he believes his spot is at about the hip, when I would prefer him to be at the shoulder. When we halted, he was perfectly happy standing at Comrades shoulder. And chewing on my sneaker, the stirrup or the reins. Then when we walked he became molasses, dark, sticky and slow. I decided to try him on the left, but he quickly said that was not an option. 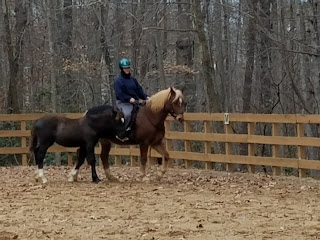 Going back to him on the right, I put the lead line around Comrade's neck to keep the pull off me. Then I said what the hell and asked for trot. Poor Comrade would jog, hit the dead weight on the lead and stop. So confused. We persevered and after a few jump starts and stops, we achieved trot. By the end Ember was trotting right by Comrade on a nice circle. What started out rough ended on a great note. 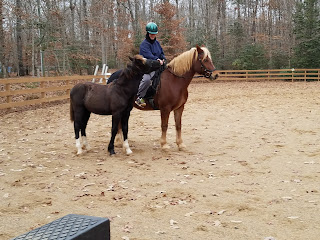 Even better was that when Peggy hopped on Comrade for a walk in the woods, Ember was better about respecting my space. Normally he is bad about leaning into me. He had a couple of baby tantrums which earned him a hind end yielding session when Comrade was far ahead. To date though it was the best leading walk he has ever had. I think the ponying helped him with space and keeping pace. I definitely see more in his future.
Posted by Nicole at 10:51 PM