A Trail of Painted Ponies: Sherman 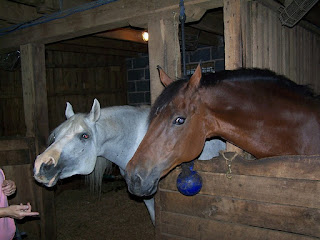 Even as we add new horses to our herd, you never forget your first, and that is true about Sherman. My Dad was a Marine for over twenty years, so we had a few moves in our family. When we moved to Virginia, the talk of getting a horse became more solid. My parents wanted a family horse that could babysit my siblings and step up for Mom and I. As we waited for the family horse, we leased an Arab mare and took care of other horses. One of those others, was Sherman. He was a blood bay, 7 yr old old style Morgan gelding about 15.2h. Sherman had a big presence and scared a lot of people. He had a tendency to make a run for the stall door too. But something about him connected with Mom. She could handle his quirks and he responded well to her. 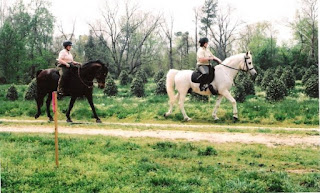 So when the day came that his owners offered to sell him to Mom, she had a hard decision. Sherman was not a family horse. He came with tons of baggage and could not babysit. Still underneath that big presence was a horse who wanted a protector. And he called to her. In the end she took the chance and answered the call. My parents made payments on him until the $2000 bill was paid and he was officially ours. Okay Mom's with the understanding we could borrow him on occasion.
Sherman still had his quirks but they became more manageable. He liked to chew on old lead lines and we had to keep a shirt/coat Mom used to wear hanging by his stall as his calm item. At times we had to put a kick chain on him when he let his opinions known on the stall walls. Many times we received calls that Sherman was playing catch me if you can. He hated needles which made Coggins a fun process. Even the holistic vet would not use acupuncture needles with him, only the laser.


Another part of Sherman was that he was a "Stelding" or "Stud-y." He would get excited to some extent over the mares, especially the dark girls. He had the cresty neck and well developed canines too. Only once though did he drag Mom to a mare. When Dottie came to live with us, she was all over him  and would have raging heats. That boy put off some pheromones. Little did we know he was prepping us for dealing with a little stud. 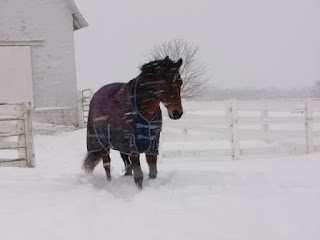 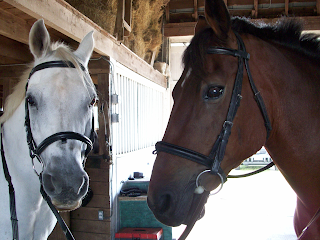 As big as his presence was, he actually was a bit of a chicken. He would prefer Barry to lead and clear any scary things out of the way. He also preferred to lead the herd gently. With his size a warning went far. His sense of fairness served the herd well. Though he was not a fan of men, he evolved over the years to let more people into his inner circle. Sherman would frisk anyone for treats, give kisses and remove hats if he could. Around Mom, he was protective. 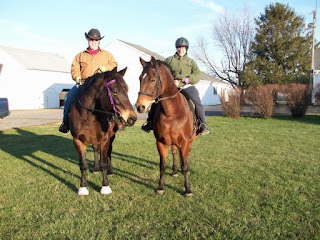 Riding wise he excelled at dressage with his fancy movement, but could also jump. More than once I jumped him bareback. But you always had to have a bit. No bit meant no work to Sherman. When Barry retired, Sherman and I went on to compete in low level eventing. We received a second place ribbon our first trip out. Where Barry only saw the jumps, Sherman saw everything but making for a "green" looking round. He did eventually turn into a horse that could babysit and give lessons. Then turn around and play with half passes and beginner canter pirouettes. But even as he let others ride, he was always Mom's.

We joked that Dad was her husband, but Sherman was her sweetheart. So when we lost him July 2010, only two weeks after my Mom's birthday, to colic it was a serious blow. I had to find the right Painted Pony for this special horse. And as it always seems to happen the right pony was there: Sweetheart Pony. 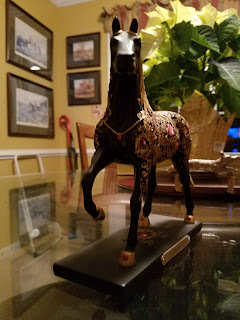 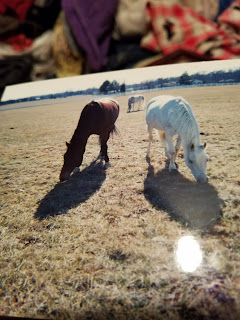 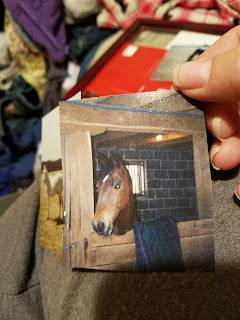 Still to this day Sherman stays with Mom. We chose cremation since we let him go during surgery, and he is in Mom's room. Sherman was an example of owning a horse that was not perfect, but taking the time to work through and in end having a wonderful journey. A horse communicator told Mom that she and Sherman had connected before and their relationship was meant to be. Mom taught him to put his foot on stuff during a layup and when he passed she said to just put his foot on something when he came back. I can't say he came back in Roscoe, but one of the first things Roscoe did was put his foot on the food bowl. I like to think Sherman was passing the baton to the next stud in our herd. Life cycles are amazing things. Sherman was a one of a kind Morgan and a perfect beginning to our herd. 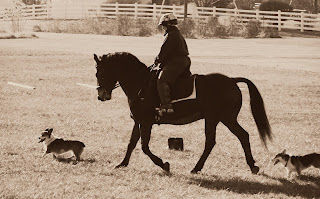