The day started dreary with rain and mud, but got worse when Mom called "Winston is colicing." Earlier Larry saw him laying on the gravel and then when Mom opened a stall he laid in the stall. Very not normal for him. Hay is his priority, not sleeping in the morning. 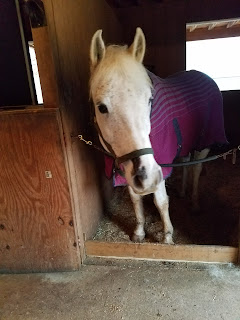 So I nabbed him while Mom dosed him with ProBi and Nox Vomica. Then I listened for gut noises. The left side had a ton of gurgles and squeaks, while the right had slightly less. He was getting warm with sweat building quickly. That freaked Mom and I out. Then the weird continued when he passed some gas and then laid down in the stall where he pooped a messy pile while still laying down. After that his gut noises were way low and his gums were pale. Time to call the vet.

While we waited, we started to see him relax. The sweat stopped building and he chewed and yawned. A cooler and a towel began to dry him. Soon we were able to put him in the stall without worrying about him going down. He actually began to look for food. We told him he had to wait for the vet. At one point he even did a "downward dog" stretch. Cautious optimism began to grow. So did his gut noises. 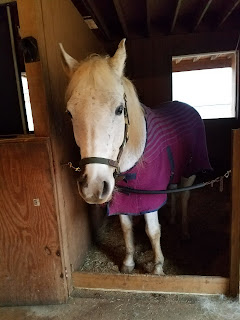 The came about 40 min after the call and we walked him to the aisle. Where he promptly had projectile diarrhea. Well time to see what this new to us vet was made of. Turns out she came prepared. She reviewed Winston's history before arriving and did a thorough exam. Winston seemed to like the English accent, but not the tummy tapping or the temp taking. She recommended doing blood tests to make sure the GI upset was not caused by something deeper. Unfortunately the blood draw was tough since his vein was shrunken.Then she wanted to tube him since he was severely dehydrated. Surprisingly, she did not sedate him for the process. Winston said that the tube felt really strange. He took a half a bucket of water and then a bucket of water infused with electrolytes. I was impressed with him and the vet since there was no bloody nose.

As a preventative measure she had us ice his front feet. We don't want his laminitis flaring up and his feet had some heat. She gave us Banamine in case he had any pain later on, along with Bio Sponge to help the diarrhea and another Probi which has a mint smell. Winston won a new fan and I lost $500. 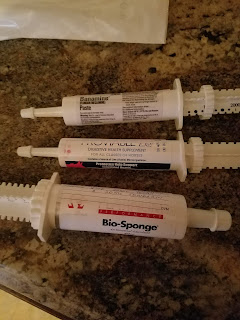 Winston happily ate hay while Mom ran out for ice. He was perfectly fine staying in the stall as long as he had hay. He peed, but no poop while we were there. The vet was not worried when she called to check in since that meant no diarrhea. We opted not to give him any pain meds though. 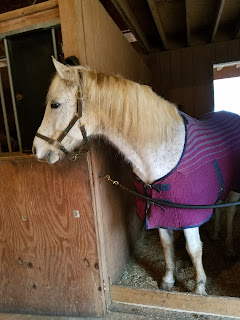 Hopefully there will be poop in his stall tomorrow and the blood tests don't bring bad news. Till then keep your fingers crossed for Winston! PS the English vet rode a Gypsy Cob in England so I told her she could ride my guys if she needed a horse.
Posted by Nicole at 10:05 PM