For the second lesson I did not plan on any separate warm up. I figured he was tired enough from the first lesson that I could manage just hopping on at the indoor. Natasha laughed at Roscoe's "Pit Crew" (Mom and Peggy), but they were needed since he could not stand still in the cross ties. You may have noticed he did not have wraps on in the first lesson and that was for the same reason. I did manage to get boots on him for this one. Until going places like this gets boring he is allowed some silliness as long as he respects our space. 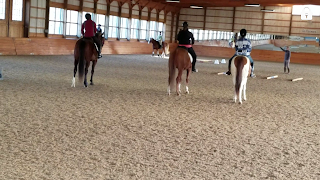 Roscoe had to call as we walked down the aisle to the arena just in case there was anybody who did not know he was in the building yet. As we waited outside the indoor, the stud came out. I don't know if the horse in the nearby turn out was a mare or if he saw the two in the indoor. So he did a studly piaffe with his "tackle" out and we told him to put it away. Fortunately, that handling is normal for me.

When we mounted and entered the ring he was interested in the other horses, but he did not drag me to them. As we neared the back mirror I let him stop and look. I wanted to know if it was a scared or interested reaction he was having. Well Roscoe kept poofing up to the horse in the mirror and moved to challenge which answered that question. No more interacting with his reflection, ha, ha. Our group included 1 OTTB mare, 1 Quarab, 1 Arab and the Welsh Cross paint. The trainer for this lesson was Lisa Hellmer who holds cavaletti lessons every Sunday and used to event.
She started us over the outside lines which had two 3 pole sections each. Fair warning the pictures are screenshots since Mom only took video. 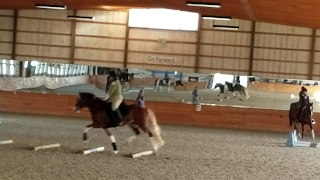 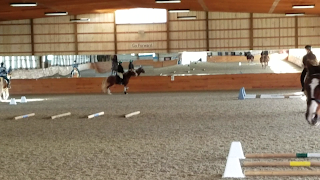 Roscoe had to stop and look at each group to make sure the painted lines were not going to eat him. Our poles at home are white or natural so that was a new thing. After the first time, he was good to go. He only had issues if he got distracted by say the horse in front pooping. Then we tripped and scrambled through. The other horses gave him the extra oomph to work, but that withered away the more poles we did. That cold of his did a number on his fitness.

I settled as it became apparent he would not charge anyone and he settled as the work continued.

From the outside line we went to a circle to include the 4 trot poles in the center. She put us with the Quarab to do the exercise. All during this I had to try to keep his stride boring and together. Not always easy to do. 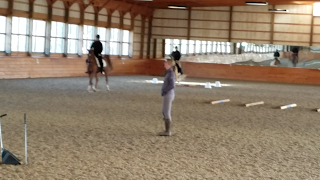 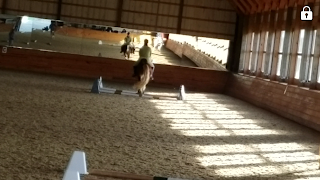 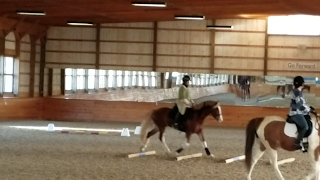 Sometimes Roscoe decided that meant slow as sludge and we barely made the poles. At least my position felt better with shorter stirrups. Mom and I still forgot to stretch my hips beforehand. 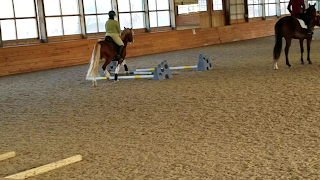 Lisa moved us on to a figure 8. I was proud of Roscoe standing still while the other three did the exercise around us. On our turn he started to have moments where he would stretch over the poles and his drift was reduced. I did put the spurs on to help with that issue.

Finally Lisa had everyone do the figure 8 at one time. Right away the third horse rolled the first pole causing the Quarab and Roscoe to circle, which made spacing and timing the crossover fun. I was able to sit and slow Roscoe for the first without him running up on the Quarab. The next cross we had to walk, then pick up trot for the 4 poles. The final cross, the Quarab rider was way to nice and stopped to let all three go first which barely left me room to trot the poles before halting behind her. Roscoe handled it all. That gives me hope I will be able to warm up at a show. 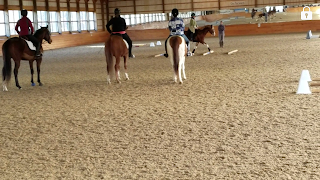 The calvaletti was a good mental break for both of us while still challenging. Mom said people kept asking how big he is since he did not look too small compared to the others. After the lesson I thanked Lisa for allowing me to bring him. She said that he made good choices during the group lesson. He has the manners and now he is ready for direction and refinement.
Posted by Nicole at 8:02 AM