After the lesson I managed one ride on Roscoe before calling uncle. I had to give in to the fact I was sick. Mom told me to stay home on Saturday and I slept the day away. Even so, on Sunday I was still muddled when I went to the barn.
I thought it was odd that Comrade and Rosemary were out in the big field. Larry normally only lets the older horses out in the mornings. When he came out to let the dogs go in the house, he explained. It seems that when he did his first sweep through the barn, all was good. He fed the chickens and went in for breakfast. Then when he came out after, what did he see? 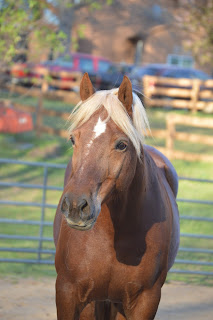 So now the mystery begins. How did Comrade get out? If he had gone through any other gate, he would have let out some of the other horses. Ember and Roscoe share the pen next to them

That only left one option... the people gate. 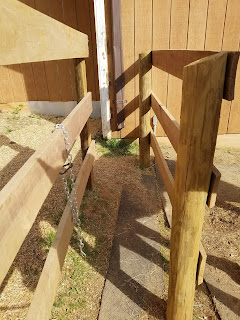 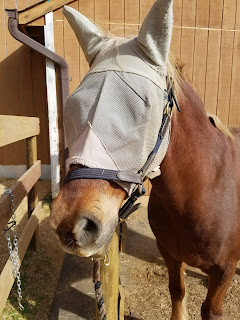 Can you believe Comrade fit through the people gate? I did not until I looked closely at the boards inner surfaces and found red hair. I stared in disbelief.

Roscoe has tried everyday to go through there, but no luck. I soon found that Comrade gave himself some wiggle room. The inside post was wobbly. Comrade had loosened it by rubbing on it. 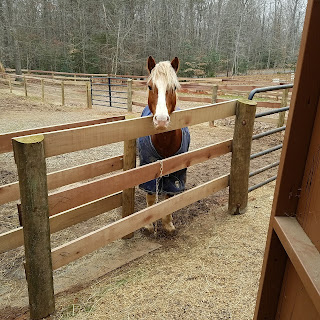 When the new fencing was done, we put a chain across the people gates so that Ember could not come through. He has shown no interest at all in them. So after Roscoe busted the decorative chain one too many times, we took it down. Little did we know it was keeping Comrade inside.

The chain is back in place. 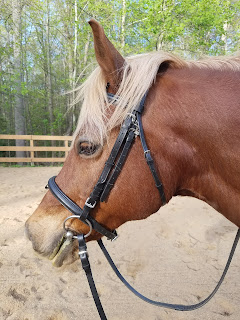 I will say that Comrade's quick thinking is showing in his ridden work too. I managed a ride on him with my lack of energy. Comrade gave me immediate canter transitions both directions. No stutter, no quick trotting, no bucks, just a step into canter.
Posted by Nicole at 8:32 PM