There has been a big change in Comrade since the camp. He makes me work for it though. We still are not as put together as we were at Sprieser, but he is much more active then before.


It is a bit frustrating not to be able to recreate the same awesome feeling we achieved at camp. I keep trying to see what is missing. Comrade is getting the push from behind and the neck carriage, but we are missing the lightness. I want that big, floaty trot.
I know part of it is him learning that yes he does have to work this way at home even though he never has before. I tried putting boots on him with some change. It has been too wet for wraps. So what to do?


Well the other day I was getting my half chaps and my eyes landed on the spurs hanging next to them. 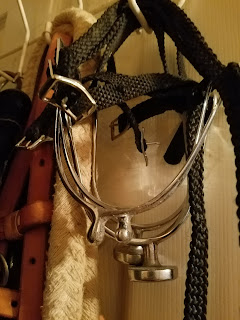 I figured what the heck, it was worth a try. I did use spurs during the camp. After warming up, Comrade felt a bit lighter than normal. As I put him together, I was pleased to feel a bigger, better, more connected trot. It seems while the whip reminds the butt and the hands create boundaries, the spurs are middle management. They tell his middle to lift and bend. That seems to be a critical part in getting Comrade to connect correctly.

The trot was still not quite the one we had at camp. It will come. I have to remember that the floaty trot came from three focused lessons in two days with an experienced eye fixing us both. Hopefully the lesson will bring out the trot at home.
All the Cobs have been working well and it will be interesting to see how the lessons go. I may even ride part of my lesson on Roscoe and then have her get on him. Except for the rare occasions my Mom has ridden him, I have not had anyone experienced ride him. The feedback would be fun. Plus since Peggy has been sick and I am getting sick, talk about timing, I will ride Comrade and may not have much left for Roscoe. In any case I will be happy to get tips for moving forward with them all. 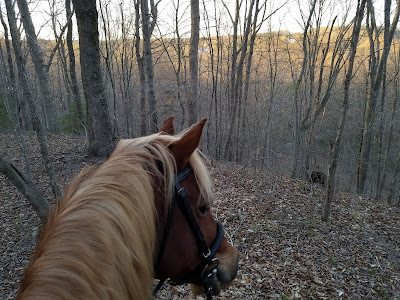 Email ThisBlogThis!Share to TwitterShare to FacebookShare to Pinterest
Labels: spurs