When your sick and moving slowly, getting ready for a lesson takes longer. So we were still getting ready when Natasha showed up. But despite the slow start the lessons went well. Fair warning, not really any media, just lots of words.
﻿ 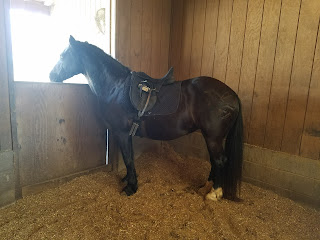 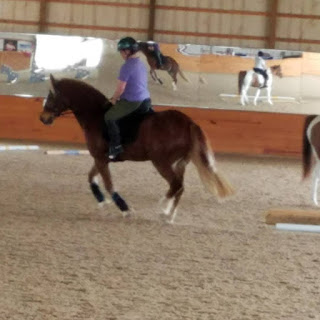 Comrade and Rosemary were up first. Comrade was so lazy in the heat, but was still working well. I had to focus on lifting his middle and moving him forward without holding his head for him. He is all for me carrying the weight. Occasionally she would have me relax the inside rein to check him. Most of the time he would invert when I asked him to move on. It's hard work you know. I had to wiggle my ring fingers as I asked to help counter his reaction. We smoothed out as the ride went along, but still had our bobbles. Working a three loop serpentine, with walk across the centerline, Comrade was not convinced he should have to pick up trot again. Natasha laughed at him. When we moved into canter work, she had me do ten meter circles before asking for the lead. Comrade gave a hiccup before picking up the lead, but it was the correct one, then pooped out into trot. Natasha had me repeat and keep my leg long despite my need to move him forward. The depart and canter improved over a few transitions. Comrade had that cool belly line going on from lifting. He still tries to get me to hold him up and it is tough not to. Our last canter was the best since he stepped right into the lead and carried the canter until I told him to trot. Natasha did say he looked fitter than when we were at camp. Not to bad for about three weeks of work. 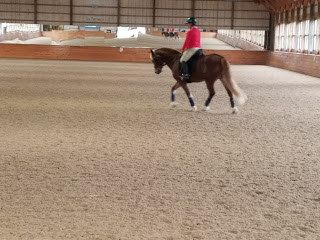 Mom and Rosemary worked on putting Rosemary in a box. Rosemary likes to spread out and go fast. Just working at the walk, she was grunting up a storm. Mom needed to hold the outside rein and give the inside while pushing hip hips out with the inside leg. Straight is a big issue for Rosemary. Natasha said she could tell when Mom was doing things right because Rosemary would flip her head and swish her tail. They had some nice moments and some smooth transitions. Lots of transitions will be in Rosemary's future. Mom is working the rust off, so she will figure it out. Rosemary did well spiraling in  on a circle because Mom had the right amount of outside rein. Pushing back out was not as good, but they both gave it a try. I will be glad to see Mom get consistent instruction and regain her confidence.
A quick saddle swap and it was Roscoe's turn. At first I was going to ride first and then have Natasha get on, but Mom recommended the reverse. And that was definitely the way to go. I was able to cool down from Comrade while watching someone with skills ride my horse. Roscoe objected to her big spurs and decided to stand still. Then he proceeded to back up. Then he figured out she was going to win and moved on. Natasha was tickled to be on a little pony. And yes he looked little with her.


Her reactions are quicker and aids stronger which helped move him past his initial resistance. It was great to see her have some sticky moments similar to what I experience. It was also great to see him move like he might actually know what he is doing.
Super short blip of her riding.

She cantered him and he showed her all the places he pulls me to in the arena. At one point she said he was causing her to lean forward. I told her that her leaning forward was like my straight. Hopefully one day I will have that kind of problem.


Then it was my turn. I was excited to see how he felt after her ride. Immediately I could feel a change. He was steadier in the bridle and he was moving forward. Plus when I traveled left, he was actually into the right rein. I am totally okay with someone helping when Roscoe maintains the change. Since she engaged his "go" button and helped with his left bend, I could actually work on myself and finessing transitions. She wants us to work off the rail to get him less dependent and truly working into the outside rein. 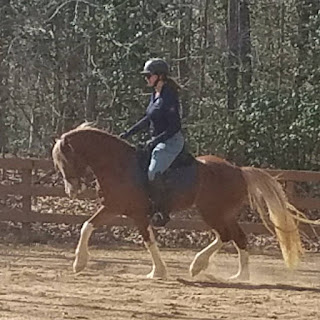 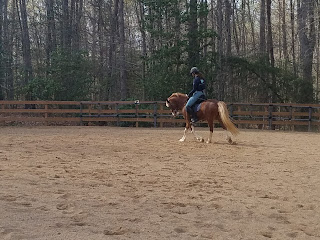 Natasha explained that instead of thinking we are working him back to front, think front - back -front. Her thought is that you have to place the bit where they can find it, before asking them to move into it. I get it and tend to think of it like a circle of energy maintained within limits of the horse. With out the hands and elbows creating a front boundary, any energy pushed forward is lost. Too much hand and the energy pushed forward is blocked. The balance is needed. The best part was that she said he is nearly to the point of being "too round" and soon I will be able to raise my hands. That was unexpected considering he has not been working this way for very long.
When we moved to canter, she had me do the ten meter circles before asking.  While we did not get a crisp transition, the canter itself was much better. I have never thought of him as all over the place, but Natasha did and this canter was more together so I could see why she thought that way. We discovered Roscoe likes the outside leg moving back to ask for canter. The transitions have been so chaotic before, I could not actually say how I asked. I do know on DaVinci and my passed ponies, we used to ask with inside leg. A former instructor taught us that way. So now I have to remember to swing that leg back a bit to ask him. He picked up his correct leads and we kept going until I asked for the downward. I really have to remember to give the inside rein to allow him to move. And let me say his downward transitions were pretty darn good. One was exceptional. Mom of course forgot to take any pictures despite me handing her my phone. Sigh...
But the bonus is that I did a short ride on him the day after and he maintained the same "go" and he tried to pick up the canter as well as the lesson. Both of us were tired. I am officially sick, that horrible kind where you function, but not well.


After the lesson we got another surprise when we paid. My private was $65, just $10 more than at Sprieser and the semi was $75. Now Mom and Peggy were both ready to write checks, but Natasha said it was $75 only. As in "x 1". Seriously that is a good deal. I plan on having Natasha ride Roscoe again since the work transfers. Roscoe likes her and I get more out of my part of the lesson because she smoothes the way. Natasha made sure to send a picture of herself on him to the others at Sprieser. I think he is the smallest horse she had ridden in a long time.
Posted by Nicole at 8:11 AM