To make Show day a little easier, we brought Comrade to our barn on Wednesday. His price for admission to our grassy fields...
DaVinci went out with him first, running ensued. Then we added Winston. More running and some squealing. All three were easy going and soon settled down to start eating.
Then we added Roscoe. More running, pushed on somewhat by Rosemary on the other side of the fence. We shut the gate to the biggest field to slow them down. Once they slowed down we noticed that Roscoe would not let Comrade within five feet of him. Comrade would approach and Roscoe would run away. 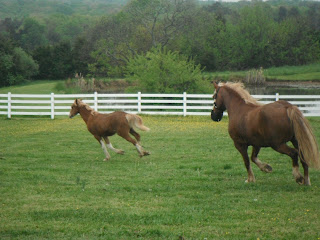 ﻿
Now for a little background. When Roscoe was born, Rosemary always kept him away from Comrade. She never liked him and when he came to our barn, she showed she still does not like him. Isn't funny how Roscoe remembered?
Okay back to the herd. So Roscoe told DaVinci that he was not comfortable with Comrade. DaVinci transforms into the Arab Mafia. He completely acted like a bodyguard getting in between Roscoe and Comrade. Winston put his two cents in too, but then mostly stayed out of it. By time we left for the day, DaVinci had run Comrade out of the field. We reopened the big field so they had options and left Comrade in the run in shed. 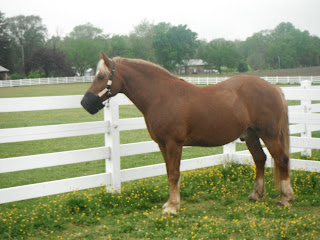 The next day we come to the barn to find Comrade's muzzle hanging by his braid and him happily eating grass with all the boys. Mom and I went out to put his muzzle back on, only to be surprised by Roscoe coming up to Comrade and playing. I guess they came to an understanding. DaVinci still pushed him around, just to keep him in his place.
Little did we know the bigger surprise was still waiting. We found a note from the Appies owner saying that Comrade had broken into her barn, which connects to our run in by a dutch door and made a mess. AND he did it all with the muzzle on. He got the muzzle off after all the excitement.
Day 2 and night 2 went much better, though Comrade still goes wide around DaVinci.
Today we put them all on the sacrifice area so they did not have to wear muzzles. By this time Comrade is really missing home where he has hay all the time, access to a stall and owners that live on the property giving him attention. At our barn he has to work for his food and move a lot since our herd is active. Plus Roscoe has chosen to annoy Comrade, which is normally the position Comrade holds at his barn. Pay back is hell :)
When we went to the barn after work about 9pm all the boys were getting along enjoying their hay.
Tomorrow will be very busy and it is suppose to rain. Should make it really fun to get both the boys clean for the show, especially Roscoe. 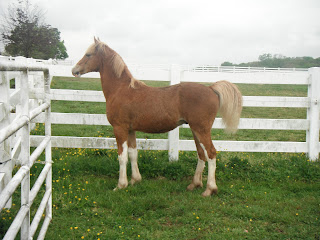 All that chrome is fancy, until you have to get it clean. Wish us luck. More after the show.
Posted by Nicole at 1:04 AM