Well Saturday was crazy busy. I had a hair appointment, then I had to get to the barn for Dottie and DaVinci's farrier visit. Dottie was a bit stiff from all the excitement of Comrade's visit, so she was difficult. We worked with her and got her shoes done. Then I turned them all out, so they could move around before Peggy and I started bathing. We looked out the door to see this view: 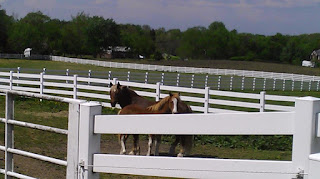 Once we tore ourselves away, we started loading the trailer. Then we started bathing or trying to bathe Roscoe. Roscoe decided that water was really acid and he kept spinning around. Peggy and I were almost wetter than him. We persevered and he finally got clean. All that chrome was pretty white.
Rosemary the whole time had been running around and calling, so afterwards we hosed her off.
Up next was Comrade, who was just as inclined to stay still as Roscoe. His tail was so dirty it needed two washings.
Rain was forecasted and the horse would be in for the night. After both the wet boys had rolled in their stalls, I took a chance and put them out. 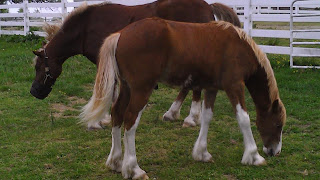 About an hour later the storm hit. I was able to get all the boys back inside. The girls decided eating grass was better than getting out of the rain. I finished primping the two show ponies and went over my checklist. When I was finished I tucked all the horses in their stalls and headed home to get my few hours of sleep before coming back.
4am came way too fast and it was still raining. We picked up Peggy and went to the barn. Fed all the horses, turned out the four staying behind and loaded the last items into the trailer. Both the boys loaded great. 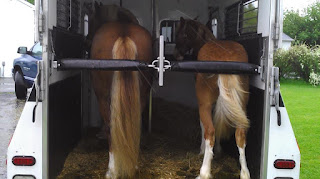 By 630 we were on the road for the over 2hr drive. We arrived at the Bel Air Equestrian Center just as the first class was starting. We took the boys for a walk, then put them back on the trailer when the rain started. I met with the guy who would be handling Roscoe. He was lured into Roscoe's "I'm a sweet baby" routine. 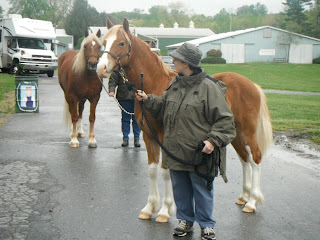 We warned him that a wild pony was inside that body. He headed in for his first class (he was the only Sec. D in breeding stock division). The little monster came out, but he did it in style. His handler was great managing him. He moved onto the Supreme championship class against the other sections. He did not place but was a good boy. He was fascinated by a Sec. A stallion. Here are some of the highlights from the two classes. 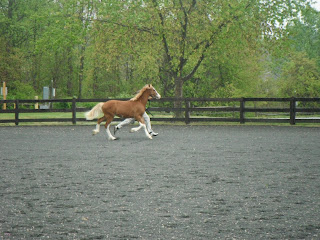 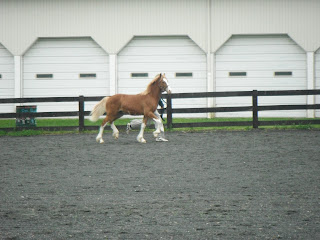 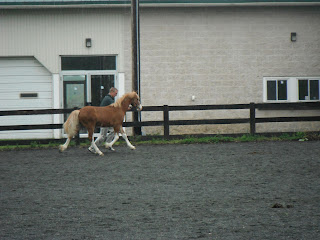 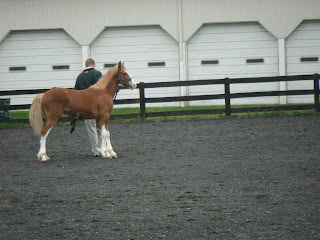 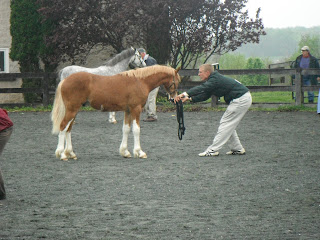 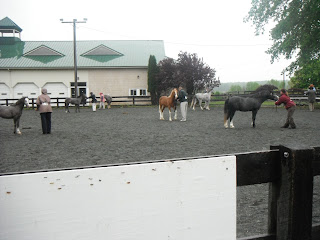 Not long after Roscoe finished his classes the rain started in earnest. The boys went back on the trailer. By this time Comrade was loading himself.  We watched a few more classes, then took cover in the truck. We had a lot of classes left to go before Comrade's. The temperature had dropped into the lower forties and there was no end in sight for the rain. Peggy recommended packing it in and going home. I held out another few classes, because Peggy would lose the money she paid for the classes. In the end, I decided to scratch. We still had the drive home and stalls to clean, so an earlier day had much appeal.
So, except for a temper tantrum by Roscoe and a half torn apart breast bar by Comrade mixed with rain the day went well. I told Roscoe's breeder she has her work cut out for her when she shows him next month. Roscoe really should be in Wales where they appreciate attitude and airs above ground in the show ring :)
Posted by Nicole at 9:25 PM