Intro to My Headliners: Part 2


A cold, wet rainy day with no riding. Perfect time to introduce you to Barry, the grey Arabian pictured above.
When my mom bought Sherman, we had to stop leasing an Arabian mare named Gazelle. We continued to ride and care for her, but soon we found out the owner had sold her. My friend and I were heartbroken. We cleaned her up and planned to ride her in a show before she left for her new home. Unfortunately, they came early and we did not get our goodbye ride. At 12yrs old, losing Gazelle was tough, so when mom started taking care of another grey Arab, I was not interested.
Where Gazelle was a beautiful dapple, grey with steel highlights, Barry was 13.3 h flea bitten grey and rough looking. Eventually I did start riding him. He had two speeds: walk and run. He had done 10yrs of trail riding and had some barrel racing training. Very quickly we realized that I could not take group lessons since he was a bit of a live wire. Barry and I had to learn to trust each other. I was lucky to have a great instructor who put a lot of time into training us.
Over the next 8 months we worked at finding Barry's right lead, harnessing his energy into productive movement and deciding the direction we would go. I had to figure out whether I was going to follow the hunter or go into eventing. Eventing seemed to fit us to a "T." Barry and I used hunter shows to get jumping mileage. We normally drew a crowd because people wanted to see how fast we finished our round. Finally after the months of training and building a partnership, we were ready for a Combined Training show away from home. The pony who had had no right lead, no speed control and the infamous Arab head spin only months before came home with the first place prize. It was only the beginning of a successful relationship.
Soon after that show, we changed instructors. My old instructor felt we needed more than she could give. Barry and I were up for the challenge. We continued to grow and Barry really took to jumping. Dressage was still just a means to get to the jumping phases. Both of us had to work at Dressage. Barry had to think what we wanted was his idea. The cute little pony definitely had strong opinions.
Everything was going great and then Barry's owner told mom she needed to sell him. I had flashbacks of Gazelle. His owner asked for 1500. My dad the negotiator came back with 1350. We were on pins and needles. Our instructor said not to lose him for 250, but in the end a promise that we would be his last owners swung the deal our way. A pony his size could be constantly outgrown and sold over and over again. So peace of mind won the day. At 13 I had my own pony.
Over the next year my parents made payments until finally he was ours. We thought he was 14 or 15yrs old. My parents surprised me with the information that Barry was the same age as me, 14yrs old and actually he was only 12 days younger. No wonder we got along so well, we are both Gemini.

We competed together for nearly 8 yrs. Barry and I won at First timers (2ft) first time out, Baby Novice (2'3") 2nd time, Beginner Novice (2'6") 3rd time and we started competing at 2'9" and placed in top 4. In dressage we competed through training and ventured into 1st. Barry and I trained at 3ft (much to my mom's surprise) and we showed everyone that a 13.3 h pony can do anything a larger horse can.
Considering I wanted nothing to do with Barry when he came, the bond we made was soul deep. He knew when I was sad and would rest his head on my chest. I knew when he was sick and stayed with him through that nasty cold that set back our training.

When I went to college, I choose to commute so that I would be near Barry. During my Sophomore year we moved the horses to our current barn. It was amazing to see how youthful Barry became once he had grass and turn out. He nearly reverted to the crazy pony we had in the beginning. His training progressed in leaps and bounds. We both came to appreciate Dressage and its nuances.

He even was a lesson pony for some of mom's students and a pony ride pony for the girls that live on the property.
When he was 22yr old we noticed some moments of lameness. We could tell it was in the hind end, but not whether it was high or low. We brought out our holistic vet, Joyce Harman to get her opinion. She also saw the lameness and recommended having an ultrasound and xray done. Our conventional vet found that Barry had damaged his suspensory tendon and his sesmoidal. 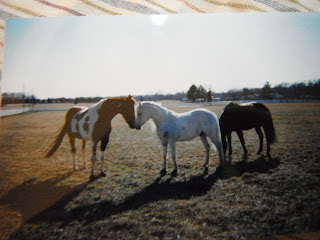 For a horse his age, that was a career ender. On the plus side, his xrays looked like a horse half his age. Great advertisement for Corta Flex. Nearly a year of stall rest, then limited turn out and I finally was able to walk him around. He would never be completely sound, but he was happy. Retirement was not his favorite, but he still had me so that made up for it. 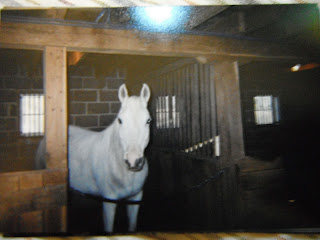 Barry settled in as a companion pony to an older horse and helped managed the other horses too. Our next challenge we had was Melanomas. Barry always had  them on his tail, sheath, and mouth. We rode him in a hackamore or a bozel to avoid the ones in his mouth. Unfortunately, the ones on his tail started changing and growing. We had some success with a product called Nublada's Cure, but not enough. At 26yrs old he developed a  tumor that grew from grape sized to grape fruit size in about six months. The melanomas were awful. Messy and itchy. We started to come to the barn and find his tail bloody and sometimes, This is really gross, infested with maggots. Peroxide, a bug spray, rubber gloves and desitin became our friends. 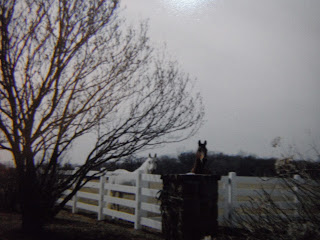 Time for Coggins came and we had our vet looks at Barry's tail. Now before I talk about her recommendation let me say that Barry was known for his very long mane and long tail. They were his pride and joy, mine too. So when the vet recommended amputating his tail, it was a shock. The tumor had gotten too big and surgery was the only option. I made the appointment and called mom who was in Florida. We both agreed losing his tail was better than the nasty tumors driving him crazy. I scratched and loved on him and then turned him out with DaVinci.

I did not realize that would be the last time I would see him alive.

Early the morning of May 29, 2009 I received a call from the farm manager saying that one of the horses had been struck by lightning. From the description I knew it was Barry. It was the longest drive to get to the barn. Mom was in Florida, so I called Peggy.

I was alone when I went out to the field to say good bye. Barry was gone after almost 14 yrs together not even a month before his 27th birthday. The bond I had with him, I wish everyone could experience.


Peggy and I talked as we walked to where he was buried. We don't think it was a coincidence that he died the day after we learned he could lose his tail. Luckily we did not lose DaVinci too as he was in the same field.


So many people asked me when I would get a "real" horse. Well Barry was the "perfect" horse for me. Barry gave me jumping, dressage and games. We trail rode and barrel raced. I will probably never have what I had with him again, but I am a better rider for what he gave me. 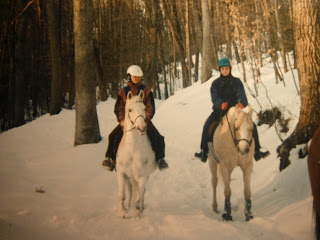 It took me a while to find my joy in riding again. In the eyes of my sister, I found it when I started riding Comrade. So many people thought Barry was welsh, maybe it is the *Raffles influence, so I guess that is why the cobs drew me. Rosemary has brought a new joy and challenge. Then last year Rosemary gave birth to Roscoe... 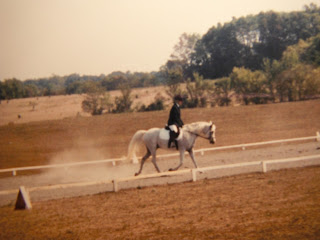 On June 19th, Barry's birthday. Some things are just meant to be. 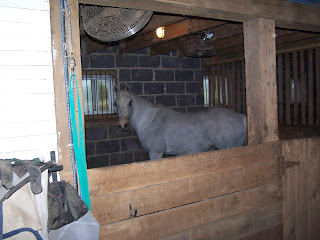 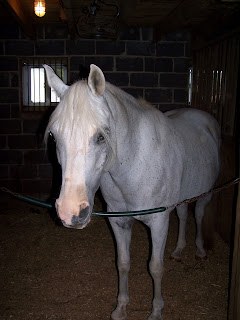