Okay, we have all seen the ads out there that specify the person  needs a horse 16h or taller. What kills me is that there are a lot of shorter horses that can carry a taller/larger person. I think people forget that like humans, horses come in different widths too.
At 5'2" I personally do not have an issue, but I have run into people through the years. Just the other day as we were unloading the trailer from the show, my mom's phone rang. A college girl who lives near our barn and knows the old farm manager was interested in riding some of our horses. I listened to mom's side with half an ear as she listed the horses we have. When she told her about DaVinci, the girl immediately dismissed him as a ride because he is 14.1h and she is nearly 6ft. Well, with that thought the only horse of ours she can ride is Dottie.
I just shook my head. DaVinci's previous owner was not a short girl and she competed him into 2nd level. He has a vast pool of knowledge that this girl's size bias is going to make her miss out on. 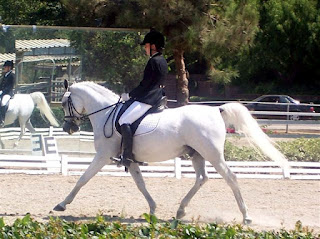 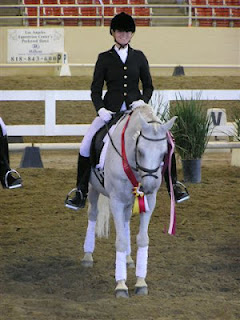 Sometimes it seems as if your feet are below the belly, your too tall for the horse. It is so limiting.

Now back to what I said about width. Barry, 13.3h and Sherman 15.2 were both short height wise, but they both were broad. Barry wore the widest saddle in the barn as he was broad across the withers. Barry was able to carry my Dad who is 5'8" on 10 and 20mi trail rides with no problems. He also went into a jump class with a girl who was probably 5'9".
Sherman was the same way, he could carry a taller person. Mom laughed one day when her student told her that someone saw a picture of the student riding Sherman and said that was the size horse she needed, not the horse she was looking at. What was funny? The horse she was looking at was taller than Sherman, but Sherman's width filled her leg better than the other horse giving a better appearance.
It works the other way too. I used to ride a 17h Thoroughbred and had no problems, but he was narrow and my leg length went further.
Size bias is everywhere and I know it won't be fixed. The way judges place and even how USEF sets up classes supports the bias. Showing Barry and Sherman, our instructor told us that with their short legs they would have to work harder in the dressage ring to show the lateral and lengthening. A horse with longer legs does not have to work as hard to get the visual impression across.
I was really disappointed when I reviewed that class list for the Welsh show. If I want to jump Comrade who is nearly 14.2, I would have to jump 2'6" or go into the Low Hunter classes which are not always offered. What the heck does the size of a horse have to do with how high they jump? So in that way if a person is ready to jump 2'6" and they ride a pony not the right size, time to go taller.
I think some of the size bias thinking is why I went into eventing. Ponies compete against horses, amateurs against professionals. Sure dressage is subjective, but the rest is a level field. Talent, ability and fitness figure in more than size it seems. I loved when Karen O'Connor evented Theodore O'Connor and that she was open minded enough to ride a "pony" at that level of competition. Plus if William Fox-Pitt waited for a horse that "fit" him, I do not think he would ever ride.

Now do not think that I want everyone riding ponies or small horses. I just wish they did not exclude them because of height. No one would look sideways if someone my size rode a 12h pony, so why then should someone look sideways when a taller person rides a 14-15h horse. Take into account bone density and width in addition to height. Okay stepping off my soap box now.

PS The college girl did come and ride Dottie the other day. It was a little weird to see someone ride her that matched her size, but they seem to get along. Maybe this will be the summer Dottie gets into shape :)
Posted by Nicole at 8:14 PM