Well where to start.
Let's start on Friday and getting the ponies ready. Roscoe and Comrade's breeder arrived from Indiana early Friday morning. So Mom and I got our trailer loaded, then headed to Peggy's to work on those guys first. We get there and find her barn being worked on.
I was able to wiggle Comrade out of the barn and get a ride done. He was really up and aware of the workers, but I figured it was good show prep. We practiced our pattern while his breeder and Mom watched. Talk about pressure. Comrade will sometimes pop a buck when I ask for the right lead canter. Friday he would canter, then do an in stride buck, then cross canter. This was not usual. There was nothing obviously lame about him, but I knew he was sore somewhere. We did find some kick marks on his butt and Addie had a cut across a hock, so they probably got into it at some point. Lovely.
Onward to the grooming, clipping and bathing while the workmen are using an air powered nail gun and an air compressor. The guys were good about letting us know when they were going to nail and both the Cobs handled the noise fine. Once they were done we headed to our barn to tackle the other two.
Since the breeder would be the main person handling the horses in the show, she decided to work with Roscoe to establish herself with him. OH BOY did the feathers fly. What ever her body language said to Roscoe, he answered with every test possible. Mom and I left her to it and went to wash Rosemary.
Roscoe was still going when we finished, so the breeder decided to "round pen" him in our little field. 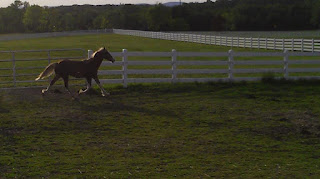 After a determined session, we had a very tired baby that still needed a bath. Sometimes it is hard growing up. At least he is still small and it did not take long to bathe him. We turned out the horses and headed home planning to be back by 430am.
Show day dawned much too soon. Mom and I gathered our two in the dark and loaded them up. We got to our meeting place before Peggy, so we got breakfast for everyone. When they came, we made the last leg of the journey.
Roscoe's class was first, immediately followed by Addie and Rosemary. Roscoe behaved the best ever. Now I will say that this was the only class I was not handling a horse, so these are a few of the pictures I was able to take. 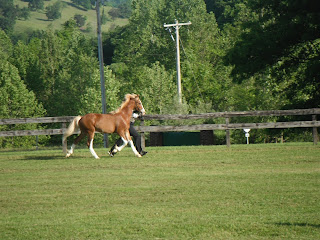 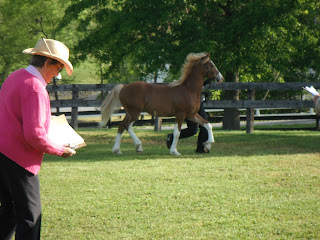 After this it got crazy, changing the breeders numbers as she changed horses. Mom and I putting on numbers and taking horses. We managed it but it was tough having four horses and only four people. Rosemary was amazing. The breeder said that when they entered the arena, she felt Rosemary pick herself up. She was now a "Show Diva." Addie was wonderful. She trotted out great. Her "Addi-tude" came out out when we had to stand for a long time. So here are the results of the Cob classes: 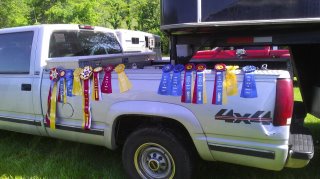 We had a long wait until the last couple classes. We tied the girls to our trailer and Comrade to Peggy's. Roscoe got to roam inside Peggy's stock trailer. They were all great about standing for so long. 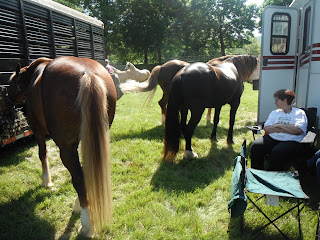 None of our ponies placed at the highest level, but they were great. Roscoe decided at one point that he did not want to stay with Mom at a place where Rosemary could see him while in the ring and broke away. Luckily he just ran over to Peggy and Comrade. Mom was not happy though.
Next up C/D Ridden Cob for me and Comrade.
I am always very nervous at shows. All day I used the Rescue Remedy and was really feeling pretty settled by time I hopped on.
Comrade decided he was not going to listen to me and call to the horses. I decided to keep him moving and wear him down. I tried to canter, but I got buck buck, stop. Circles, shoulder ins, transitions, I tried it all. The breeder really wanted me to fix him, but I knew I could not. I really hated to disappoint her. That combined with frustration and tiredness put me in tears.
There was no way I was pulling out. Even if we did not canter and gallop he could still trot. Once the class was ready, I took and breathe and decided I would ride what he gave me. Before the pattern they asked for some gaits on the rail as a group. Surprisingly Comrade did pick up the Right lead for about a quarter of the ring before bucking and stopping. Left lead was not happening though. At that point I knew he was off. Left lead is his good lead, Right his bad. I have ridden him for almost 3yrs now and I know he does not handle pain well. Something was wrong.
The show must go on, so off we went for our pattern. Walk to the end, trot the short end, extended trot across the diagonal. He gave me the best extended trot ever, especially for him. He prefers collection to lengthening. Then Right lead canter... or canter buck buck stop. Then extended trot across the diagonal... not quite since he was visibly lame now. Then left lead canter... nope. then gallop down the long side... okay we tried more extended trot. Trot, walk halt at the end of the long end, this we could do. Whew, that was over.
Now we had to take off the saddle for the conformation part. The breeder and Mom came to help me. Mom told me he was off. I decided that if he trotted for me we would trot, but I would not force him. The judge commented that Comrade was not impressed with canter. I told him that he was off today. Then we walked straight and trotted. I have to say he trotted lame, but great. NO DRAGGING needed. So many of the geldings looked liked they were being dragged and I told Comrade he would not be that way. Finally the class was done. Here are a few shots mom was able to take. 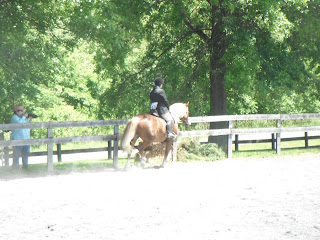 Mom put the class in perspective for me as we walked back to the trailer. She said Comrade normally gives up when things get hard and he did not this time. He gave me that extended trot and he did TRY to canter. Plus as we were halted waiting for our turn he stretched down. He gave me everything he could. She can be a pain at times, but I needed that break down of the ride.

Overall all our ponies were super stars. It was really great to see them strutting their stuff. Now I have to wait for the professional pictures.

When we got home Roscoe sacked out in the stall. The poor boy was exhausted. Me too actually. That night I slept like the dead for 10hrs.
Gotta love Show days.
Posted by Nicole at 5:11 PM