...I will never understand.

Two months ago when Winston was diagnosed with Laminitis, Jenna was three legged lame. Our vet later dug out the worst abscess she had seen recently and recommended stall rest. Jenna's owner left her in one day and then refused to leave her in anymore. Poor mare could barely walk, but we had to put her out.

So last Wednesday, I get to the barn to do feeding and put them out in muzzles before heading to work. I was greeted with this when I went to put on Jenna's muzzle: 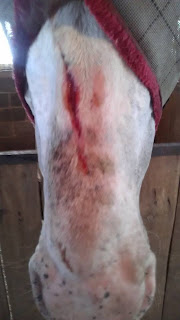 With her fly mask on I only saw the massive swelling on her nose. Then I lifted and saw the lovely gash going up her face. She also had some kicks on her chest and ribcage. Probably during the bad thunderstorm the previous night the girls got into it. The kicks are on Jenna's side that she basically is blind on.   I knew she would need stitches, so I called Mom who luckily was on her way to the barn. When she arrived she called Jenna's owner at work to tell her she needed to contact the vets. Her owner wanted to wait until she got off of work before calling. WHAT!!! We told her it would be an emergency call that late in the day. I ended up having to send this picture to her work email before she told us to call our vet to come. Mom handled the vet visit and took care instructions. Jenna's owner did not come until the end of the day.

She ended up with 7 stitches, to come out in 10 days, and doxy twice a day. The vet did not put her on stall rest, but much to our surprise her owner did. Yep that's right when she is three legged lame we were told to put her out, but stitches on her head that needs stall rest. We gritted our teeth and dealt with it.
Well Saturday, I finally lost my cool. We had been spending 30min + cleaning her stall in the morning all due to trashed hay. This mare pushes all the sawdust from the middle to the sides from pacing. When her owner showed up Saturday, I put my foot down. I told her she was giving too much hay and too much food. She is not working, moving or even swishing flies. Jenna did not need that much energy food. She still insists on giving sweet feed even though Jenna has had a bought with Laminitis. I said "If she is going on stall rest, NO MORE SWEET FEED." It has been proven to give sugar highs and this mare will beat the stall walls. She would be worse, but we had been turning her out solo for short periods.
Sunday showed I had gotten through to her. Jenna only had hay cubes and bran in her feed bucket and Hallelujah, her stall did not look like we bedded with hay. 5 more days, Ugh.
We have thought about making a separate area for her, but it will be a lot of work for us in the long run. Considering her owner thinks moving two bales of hay in a wheelbarrow is too hard for her back, building a fence will fall all on our shoulders.
I wonder if she could go out with the new Quarter Horses out in the big field. Maybe she would respect those geldings better. If only. Oh the joys of sharing a barn.
Posted by Nicole at 11:16 PM