This was one busy weekend. My farrier came early Saturday to do Dottie and DaVinci. Then Peggy and I took DaVinci and Rosemary out for a trail ride. We took them down to the creek and let them walk around in it. Rosemary had to make sure it did not eat DaVinci before she took the chance of walking in it. Neither minded the dog bounding about splashing water everywhere. On the way back we had to do some trailblazing through some overgrown portions of a lesser used trail. The ponies were game though and trekked right on.
Then originally we were going to take out Dottie and Winston, but Peggy decided to just watch. So instead I tacked up Winston and Comrade. I started out with Winston, who was a little spooky, and then went to Comrade. Peggy ended up warming him up for me. Once Winston settled I let him be done and took up the reins on Comrade. I knew from Peggy moving him around that he was in a lazy mood. With no whip, I went with transitions to get him moving. Trot to canter to walk to trot to canter to halt. Then when he was quick with those, I went from walk to canter. Comrade did really well. I helped by picking the same spots for the transitions. Considering all his time off I thought he had some smooth transitions.
Finally I ended the day with putting the western saddle on Roscoe for the first time. He of course did not care to the point he tried to take a nap. I came back to his stall to find the saddle almost sideways and him covered in sawdust. Silly boy. I spun him around to see how he was. Roscoe seemed a bit lazy after his time out with Comrade. That was perfect for what I had planned for the next day.
Sunday was warmer and my Mom was off work. So the plan was to work Roscoe round penning to get him thinking work. Then I would get on. First we had to put up a barrier so that we could use a smaller part of the arena. So up went a row of jumps with a row of cavaletti height poles in front. Toss a few cones and voila, a barrier.
Mom and Larry started doing the free lunging for respect with him. Having him change direction and quicken his pace. Most of the time Roscoe behaved, but he still had moments where he resisted. They had to find the fine line of working him enough to gain respect, but not too much to wear him out. Roscoe for all his rebellious times was awesome. At one point he let out a big breath causing the saddle to slip to his side. Mom told him "whoa" and he stopped right away. The saddle continued to slip under his belly. He stood right there like he did not even notice. Larry undid the saddle and let him move without it before putting it back on for the ride.
I took a few deep breaths before I got on. This was a big step for me. I seriously thought I would be paying the breeder's daughter to start him for us. She probably could get the initial steps done quicker and better, but we will try it slow with me. When I got on, I flexed him side to side. Once I was moving that would be my "emergency break." I would essentially be a passenger. Roscoe actually takes his cues from Mom on the ground. More and more I will start asking him to listen to me, but this is a nice way to transition him from groundwork to saddle work. My actions support what Mom is asking him to do.
Roscoe went right to work with no issues carrying me. He definitely has his Mama's big walk and it is starting to look like he has her work ethic. 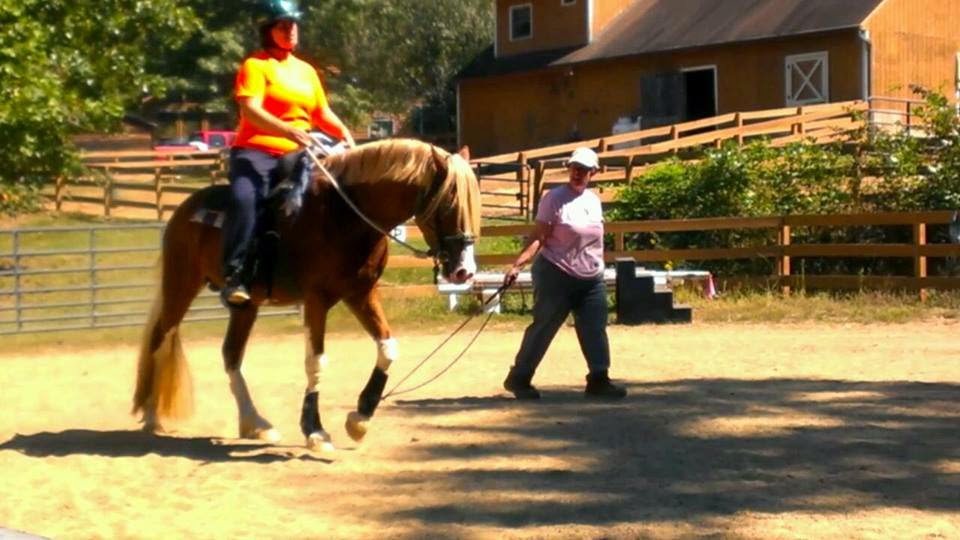 After changing directions and checking the brakes, we asked him to trot. It was an "AWE" moment. All that movement we have seen in him since the day he was born, I was finally feeling first hand. Roscoe actually had rhythm and push. Plus he felt like he had carried someone before. His self awareness was surprising. 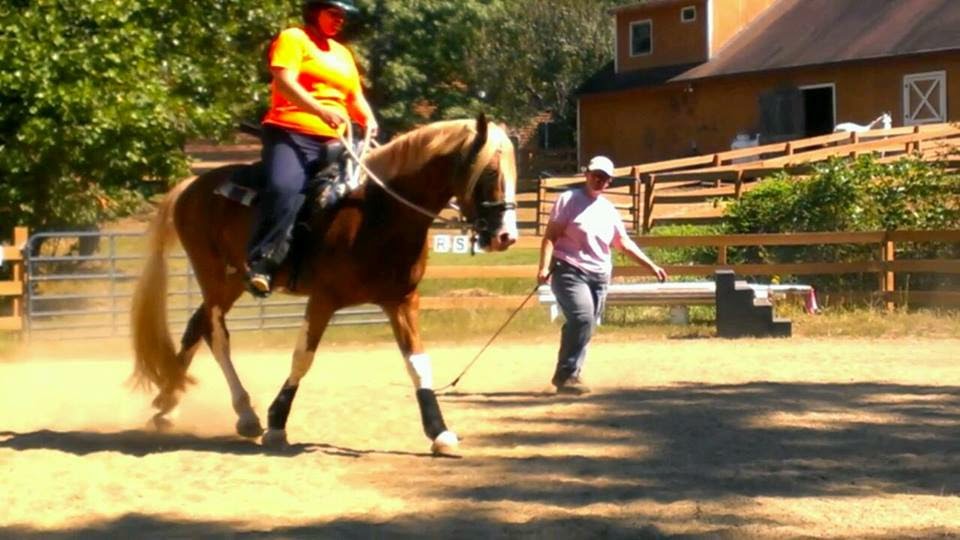 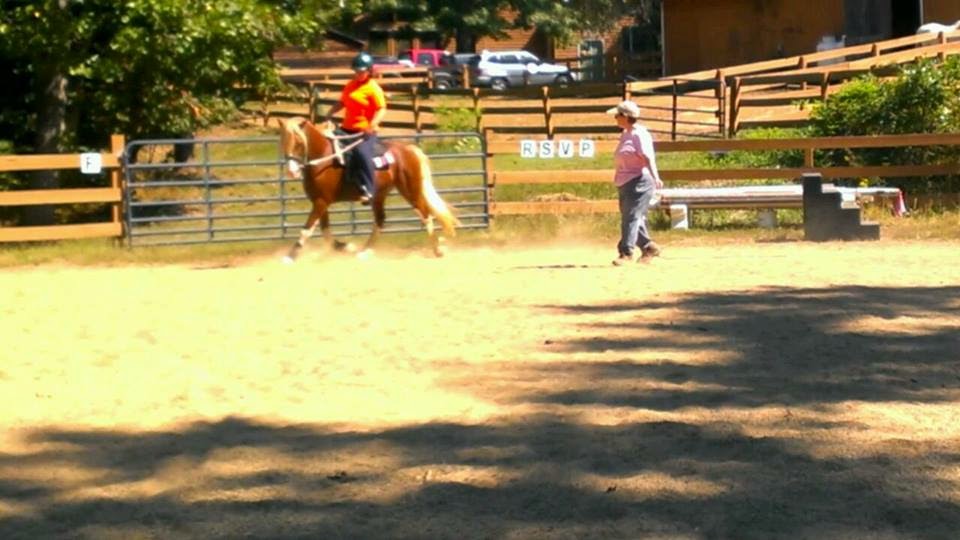 I guess all the ground driving and work Mom has done has really helped. Rosemary did not feel this put together at 3 and she had already been started. Roscoe also reached for the contact. I could have trotted him longer, but he was tired and we needed to end on a good note. After going both ways he halted and I got off. That was so cool. When he was born 3yrs seemed like such a long time, but it went so fast. 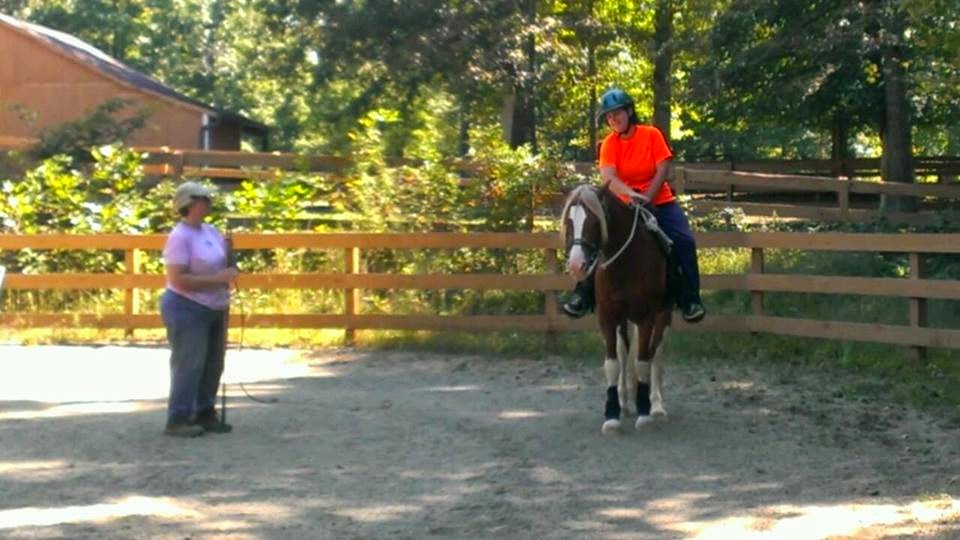 And the full video


Now the plan is to ride him the next two days and keep working on his canter from the ground. I am not ready to push him there while on his back. Today we did push him more trot wise. I cued him more with Mom adding the gas. At one point he moved forward on my cues, then stopped and looked at Mom like "Uh oh was I suppose to do that." We dealt with mare distractions and I posted on him for the first time. He still felt as good as he did the day before. What a super pony!
We capped off Sunday by fulfilling one of my goals for this year, driving Rosemary solo. Since the ring still had the barrier up, Peggy drove her down the driveway (a big downhill) and around the corner to come in the arena from the other side. Other than protesting the new gravel on the road, she went right to work. Mom moved the two ends of the barrier closest to the fence to allow the cart to fit through. Peggy then burned some energy off Rosemary by letting her cruise around the arena. On some of the turns the cart slid. Peggy laughed and said that was okay. Then she handed the reins to me and jumped out. It was my turn.
I forgot the pictures, but here is the video

I have to say, I felt good. The contact and my position just clicked. I was not overly worried about my wheel location or the gates. Rosemary and I just went for it with fun results. I did not ask for the pace Peggy got out of her, but we did cruise around and change directions. When I finished, Mom drove her back to the barn. Such a good day. We are so lucky to own the horses we have. I am doing more than I ever expected to do and that is all due to owning the Cobs.

Stay tuned, I will have a giveaway soon. Will probably involve trivia questions and sharing on your blogs, but I think the prize is worth the work.
Posted by Nicole at 7:16 PM