"Is There A Reason Roscoe is Out With..."

I walked into the barn one morning and saw a blanket on the floor. Knowing that was not a good sign, I looked to see whose blanket had a problem. From a past repair, this blanket showed to be Rosemary's. And it had a new tear needing repair
Then I saw Rosemary in the stall behind me wearing a cooler and covered in dried sweat. She looked exhausted. I snuggled with her, looking her over, but still confused. She gave me no indication that anything bad had happened. She just seemed tired. After seeing the damaged blanket and her so sweaty, I was having visions of her stuck somewhere.
What the heck had happened? I had seen Larry walking around and waited to ask him. I never would have guessed what he explained.

It seems early that morning Peggy and Larry were awakened by their dog barking. Peggy ignored him, but Larry being less tolerant checked the situation. A glance outside had him asking Peggy "Is there a reason Roscoe is out with the girls?"

My jaw dropped. What the hell? 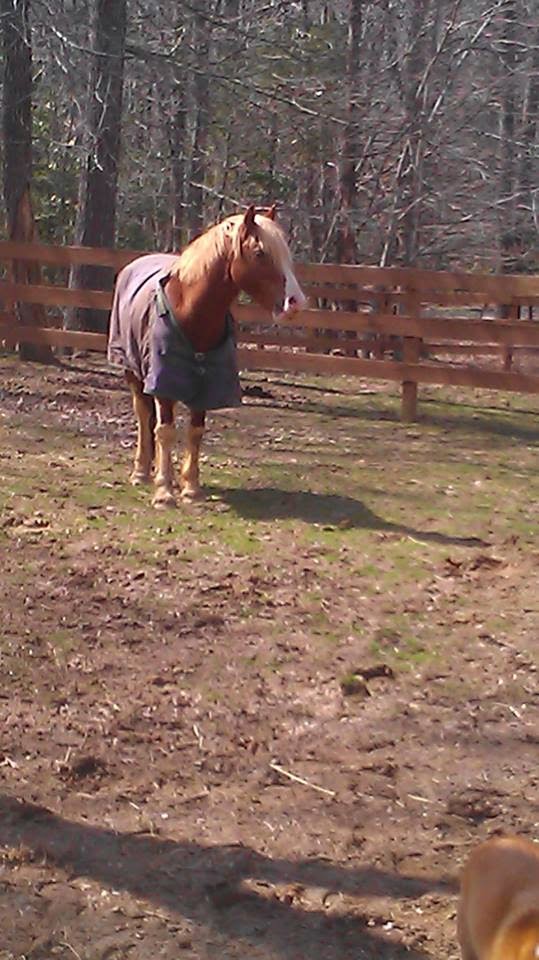 Roscoe had pushed the gate that has a notoriously loose pin and got it off allowing him to go through. Peggy said Rosemary ran Roscoe off whenever he went near Dottie.

By time she got outside, Rosemary and Roscoe were racing around. She could appreciate watching the two cobs run, while trying to figure out how to separate them. She ended up widening the same gate he came through and waiting for them to run back into the other side. Once back with Comrade, Roscoe calmed down. Unfortunately for tired Rosemary, Comrade started charging her. Peggy checked over Roscoe before rescuing Rosemary. Poor pony girl took a nap later.


Now we have to hope nothing happened before Peggy was watching. Plus we need to get the hot wire up very soon. Then I want a front row seat when his butt gets zapped.
Posted by Nicole at 11:18 PM