Side Reins to Saddle

The day before Roscoe's grand escape, he was kicked by Comrade. When I put him in the side reins that day he was slightly lame on the right hind. That cut the session short. I worried this would be like when Comrade got kicked by Addie and was lame for two weeks. Especially when he was worse after his run around with Rosemary. 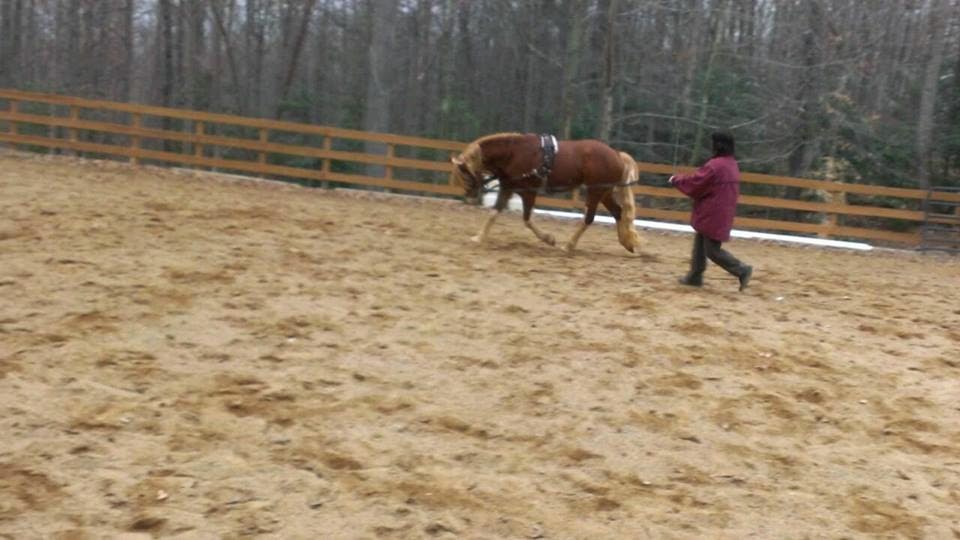 Thankfully youth has its benefits. Before Mom left for Florida, we took him out to show her his side rein work. He was definitely feeling better. More than actually, since he was trotting fully with the side reins. Roscoe seems to figure out challenges quickly. We needed to raise the bar, by starting to connect the front end with the back end. I will put him in the balancing system soon, but for the moment we used the lunge line to create two lines. The outside line was run around his butt to encourage him to step under. This was new for him. The long lining we do for driving goes across his back. I loved being able to see some suspension come into his movement.


Mom took some video of him trying the new work. I was itching to get in the saddle to see how it would translate.

He stretched down when released from the side reins. His neck had that relaxed flop that is something I am for. We may not be doing dressage tests yet, but I am happy with the pace he is developing. I really did think about doing a show, but the weather hindered too much ride time.

The weather delayed my chance to see how the side rein work translated to saddle work. Then Peggy got whacked in the head by her dog. She had a black eye forming and she was nauseous. I could not go riding in case she needed me. Eventually after a few hours, I checked on her and was reassured she was okay. That means it is time to ride Roscoe.

Right from the beginning I could tell he was accepting the contact better. He consistently reached into the bit at the walk. Plus he maintained his forward with little encouragement from me. My baby is growing up!!! I knew trot would be a challenge, so I tried to ask him when he had a nice feel at the walk. Then I kept my outside hand near the saddle horn to be consistent for him. He actually did better than I could have expected. I really wish someone could have videoed it for me so I could see if he looked as good as he did in side reins.
When he came above the bit, I only had to add inside leg and stay quiet with my hands. Then it was up to Roscoe to figure it out. He normally did within a few strides. What an amazing process to watch. The more he figured it out, the more I asked. We did transitions, where I set him up to maintain the contact through out. The success rate was more than half. I was so happy.

Roscoe is my first horse I started from the beginning. With the other horses we have had to slog through past issues or body problems. Is his freshness the reason he is learning so well? Whatever it is, I am one proud owner of a super smart pony.
Posted by Nicole at 11:37 PM

Email ThisBlogThis!Share to TwitterShare to FacebookShare to Pinterest
Labels: Roscoe, side reins