Scratching your head yet? Yeah, me too. In packing for Roscoe's trip, I found that he has outgrown his first saddle. This is much sooner than I expected. Normally he wears the X-Wide Isabel with a sheepskin pad to fill any gaps. Well we can't send that with him since two others use the same saddle. 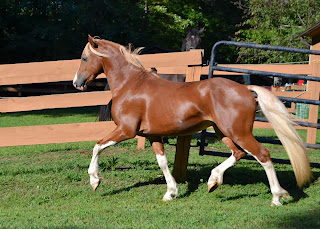 So I pulled out the Thornhill Pro Trainer I first rode him in a couple years ago. Mom looked at it and said the fit looked good. Now the challenge of a girth. He is still has that narrow youth look. When we used the saddle before, Dottie's dressage girth fit great. Can't send that either, so the hunt was on. I found a short string girth that was worth trying. Under normal circumstances the girth was too big, but with nothing else it would have to do even though it was nearly on the last holes.
I hopped on him to test it out. He did not react badly, great. As we walked around to warm up, I could tell the saddle was a bit tight on his withers. Then when I asked for trot he did, but reluctantly and was quick to transition to walk. Roscoe does not seem to want to move forward if he has any pressure on his withers. I did not have a whip with me to see if he would move on if encouraged. Instead I think I shall bring the Thornhill Germana and try that on him. It is a similar saddle but wider. I bought it for Barry using a wither tracing only to have him outgrow it in months. I really love changeable gullets. They make life so much easier with a growing, developing horse.
Leave it to Roscoe to be narrow around, but wide on top. 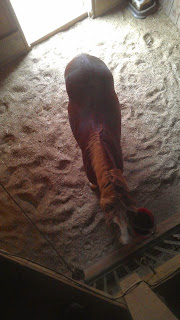 We have put together 35 days of food, hay cubes and beet pulp. That will be fun to load into the trailer. Plus sugar cubes, treats, fly spray, vicks, pro bi and fly masks. Still more to gather. The trailer got looked at and greased up, so it is ready. Hopefully today I can get the tack fitted and then cleaned.
And I still have to pack for me. Too much stuff to do and not enough time.
Posted by Nicole at 10:19 PM