Worth Her Weight in Gold

This holiday Peggy had a couple family members visiting. They toured DC and Middleburg with a bonus of seeing a foal at a friends house. At the barn they got to go for a drive with Comrade, who was much better behaved than his last drive. On their last full day, they got to go for a ride.
We ended up putting the western saddle on Dottie for the guests to ride, while Peggy and I rode the cobs. Dottie is our steady, trust worthy mount. Since she used to do therapeutic rides, she knows how to read a rider and won't do more than she feels they can handle. Once everyone was mounted and we taught her niece to steer, we headed out on trail.

Rosemary had to go first because she was not in the mood to regulate her walk. Comrade took up the rear with Dottie in the middle. We kept the ride on the more level areas and kept it short. Dottie did great and only trotted once when she felt like catching up to Rosemary. Peggy had to school Comrade a bit but it did not bother Dottie. 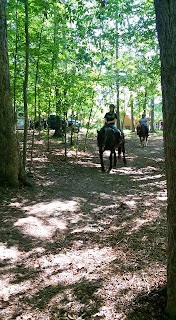 So I breathed a sigh of relief that all went well as we came back to the arena. Peggy wanted to let her brother ride Dottie, but somehow it turned into her niece trotting around on Dottie. She got comfortable once I showed, as best I could, how to sit the trot. Though Dottie did wonder how she got drafted into doing a lot more work then expected. Dottie gave her niece a great ride and even walked over some poles for her. That mare is worth her weight in gold.
Then Peggy says she has to go cook dinner and she puts her brother on Comrade. Now you all know I love Comrade, but he has his moments. I though her brother would just be walking around. Oh, if only. I looked over from watching Dottie to see Comrade cantering down the long side. He pulled back on the reins and Comrade came down to a trot, but he would not walk. I had to tell him to turn him into the fence. That worked, but Comrade was wound up now. Peggy owes me big for watching over him. I was so relieved when pictures and ride time were over. The horses at least got paid well with treats and carrots so they were happy.

When I got home, Lisa texted me a Roscoe update. Still no mares ready yet. That figures since she and Roscoe on working better together. Ah well more time to fine tune. I did tell her we were have withdrawal and she needed to send pictures. So she did one better and sent a video. She said she missed his better movement, but what she did catch was pretty awesome. He looks to be maintaining his weight even with all the round pen work which is comforting. Can't wait to go see him next month though. Here are a couple shots from the video. 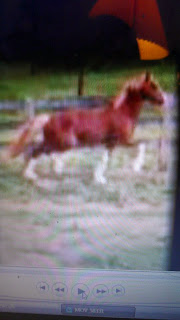 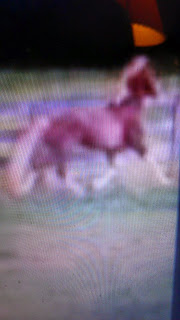 Email ThisBlogThis!Share to TwitterShare to FacebookShare to Pinterest
Labels: Dottie