Christmas day dawned, wet and warm. We had dinner plans with Peggy and Larry, but I was determined to ride. Rosemary was elected as she was the least wet and dirty. As I cleaned a stall, I thought about how to change up the straight line 4 poles already set up in the arena. Inspired I came up with the O' Christmas Tree exercise. 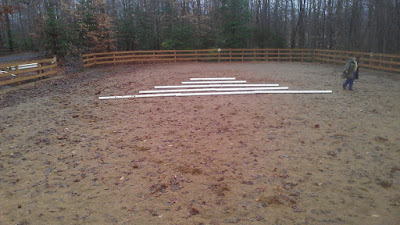 This pole exercise will encourage straightness and you can choose to work over one, three or five poles. For Rosemary it encourages her to step through her hind end and push as well. Since she tripped a bit when I worked her over the four pole line, I put splint boots on her. She did figure out what was needed during that ride, so I was interested to see how she did today. Rosemary also sported her new bling. I think she liked showing her welsh pride with her dragon. 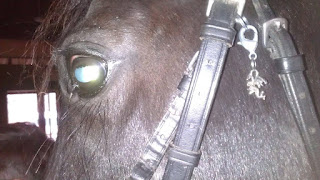 I started Rosemary over the single pole to see how she was feeling. Surprisingly she did not try to avoid the poles. She actually traveled straight. A Christmas miracle. That continued even over the three poles. I noticed the distance seemed short for her, but she adapted well. Mom said she was bending all her joints. I moved on to the five poles with the same distance. Again she trotted right through them with no hesitation. No tripping today. Mom stretched the poles out a bit.
Other than feeling more comfortable through the poles, Rosemary was still not working too hard. So Mom again stretched out the poles. Again Rosemary adapted, though she did need a bit more effort. A little tired she tried to get fast and I let her figure out how to make it through the poles and she did by the next pole. 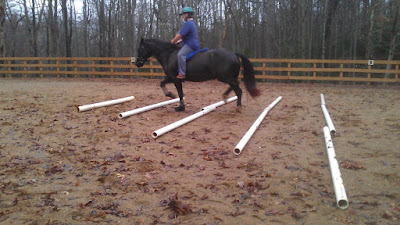 By the end, I could feel her pushing from behind rather than just getting fast. Her trot around the ring improved and smoothed. We both had fun despite the rain. Here is a short video.

I wanted to hop on Comrade too, but the rain picked up and he turned into a mudd ball. Ah well next time. With him I could add a star at the top of the tree, ie turn on the fore or hind or do some voltes along the sides. Poles are such a great training tool.

And now I will leave you with a picture of my Dad's annual equine finance funny shirt he gets from me. 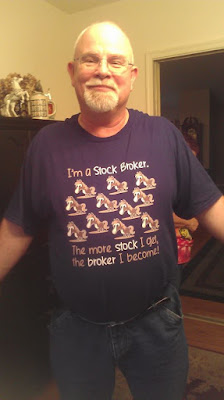