Thinking Outside the Box, Senior Management

Out of seven horses in our barn, four are 19 or older with one in his 30's. The older three get two full meals a day, with a third for the oldest. Their senior food is combined with Pro Biotics, Buteless, Lysine and Vitamin E. So far that is pretty typical for senior management.
Where we think outside the box is when dealing with hay. Sonny (the oldest) and Dottie (3rd oldest) have been quidding when they eat hay. DaVinci (2nd oldest) quids only occasionally due to melanomas in the corners of his mouth. During the day the hay nets help them all eat slower and they don't quid. At night Sonny goes into his own space, but Dottie and DaVinci have to deal with the younger two. So they get a flake or so in a stall before sharing hay bags over night. Sonny has a bucket we put his hay in.
Well after seeing all of Sonny's quids in the morning, I remembered that with our previous 30+ horse we used to cut up his hay and figured that would work for him too. We spent hours hand cutting flakes for him. That gets time consuming, but seeing Sonny quid so much less made the effort worth it. We all thought about how the task could be easier. Store bought chopped hay was not cost effective and normally has stuff on the hay. Peggy went looking online and found a leaf shredder. The first one she found pretty cheap and worked like a charm. It utilized weed whacker twine and you just dropped it in the top and out came chopped hay. 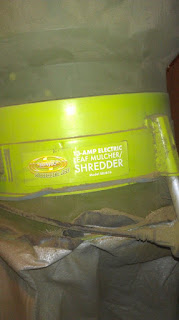 What took hours by hand, only took minutes with the shredder. The first shredder died when Peggy tried to make it better, ;), and the second shredder ended up being better because it had a stand which allowed a muck bucket to fit under. The cost of both compared to the cost of bagged chopped hay showed they paid for themselves pretty quickly. Sonny and the other two get a soft grass that is awesome quality. With the shredder we are able to give Sonny the courser grass we give everyone else in the hay bags. He definitely enjoys the variety.

Anyone else get creative with managing their seniors?
Posted by Nicole at 9:47 PM