Life has been a series of hot, humid days with a lack of riding. I'm still deciding what classes to do at the show next weekend if it is not raining :(, but the horses shined during a family visit. Rosemary, Dottie and DaVinci pulled pony ride duty, plus Rosemary gave carriage rides. My niece was much braver and decided to ride by herself on Rosemary. Dad walked her around the trails and the arena. We tried a little trot, but she was nearly bounced off. Rosemary gave me a look like "I told you she was not ready" since pony girl hesitated to trot. Meanwhile my nephew rode Dottie. Mom lead him out on trail, but we cut him loose in the arena. Dottie is a super babysitter and will just follow someone on the ground or Rosemary. We did give him tips on how to steer her and get her to walk on. Surprisingly, he picked it up and got her moving where he wanted. It was so cute to see his little feet kicking at Dottie. If you ride with clear intent, Dottie will listen and answer. He had a blast riding the big girl.

When he got on DaVinci, he said he walked too fast and he wanted Dottie back. I think part of it was he could not be cut loose with DaVinci. Rosemary was a star dealing with my fur nephew running in front of her and my niece flapping her "reins." We are so lucky to have such adaptable horses. Here is a video of them riding the girls. 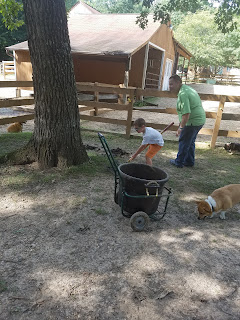 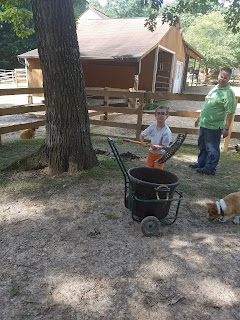 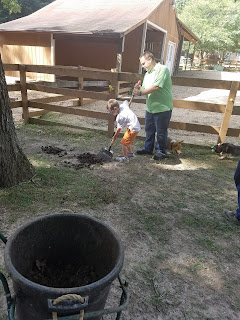 After, my nephew was thrilled to become a member of Manure Pickers of America by helping with the evening clean up.

My niece was more interested in when she could get a horse. The question of little girl's throughout time. She laid claim to both Rosemary and DaVinci.

I have also started working on Alanna's Foal Pool prize. I should say I have started again. The colors were not right when I worked on it during the trip to Indiana, so my sister reworked the pattern. Now I am making progress. It will be the biggest one so far and uses the most colors too. 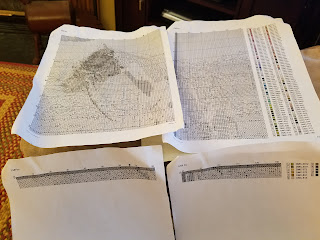 And finally I received good news over the weekend about Roscoe. Remember the collection at the end of last month? Well it seems the breeding took and there is a possible 2017 foal coming! Roscoe kept to his pattern of first cycle successful breeding and now his first by AI. I think it was meant to be considering how smoothly everything went that collection day.
Posted by Nicole at 9:50 AM