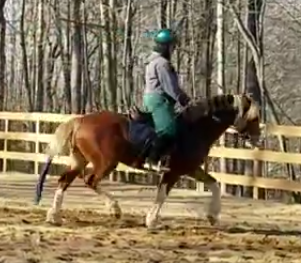 Roscoe has been working hard since camp and I wanted to give him a mental break. Last weekend our plans were foiled by a storm, but we were able to play today. Mom set up a line and two single jumps. 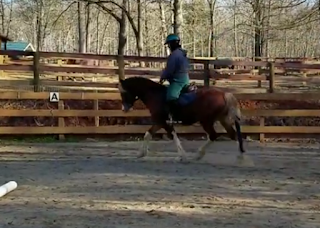 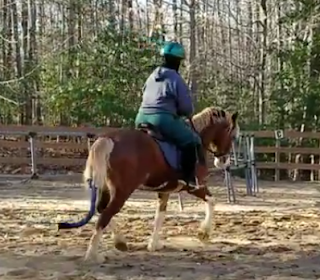 We warmed up over ground poles and figured out what distance worked for Roscoe. Surprisingly, the best ones were the "stretched" poles Mom set. I guess our short legs make pole setting a little more fun. Once Roscoe was warmed up, Mom put up a couple little "x's," which Roscoe saw as raised poles not worth much effort. We had to tweak the ground rails to suit Roscoe, but overall he adjusted to the distances.
Since that was not a challenge, Mom raised the "x's" and made the second jump in the straight a vertical. The center jump became a baby ramp oxer.
Finally we succeeded in finding Roscoe's jump. He amazed me by smoothly jumping the "x" and cantering forward over the vertical and cantering around the bend. He felt great, but I still brought him down to trot before going over the ground pole - "x" - ground pole series where he gave me another great jump and cantered out.


Of course when we videoed, it was not as smooth. Roscoe would jump in, but get crooked going toward the vertical. What I liked about how he worked was that he made it work. Long spots, close spots, me jumping ahead or being left behind, Roscoe was steady. Video 1
When I pointed him at the baby ramp oxer, he just trotted over it. Lazy pony! When I changed directions, he was not inclined to canter. That's okay, I just tapped him with the whip to keep him active. This time when we approached the oxer, he gave me a jump. Video 2 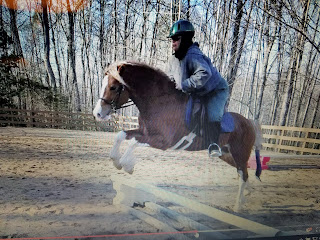 I was thrilled with the jump school revelations. 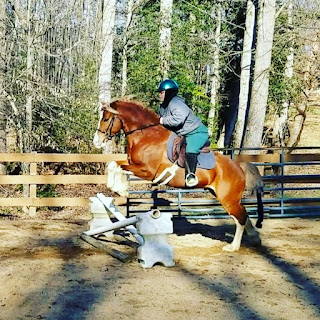 Hey guys I may have a jumper pony soon!
Posted by Nicole at 11:25 PM