Then comes a Show! What I did not mention was that during my lesson Natasha was like "You should come to Morningside next weekend." When I asked what test I should do if I only do one, she said Intro C. Talk about leaping into the deep end. I decided that I would stick with B.
As my rides after the lesson showed marked improvement in our canter departs and the time came to register for the show, I took the leap.

I warned Natasha, I am a stressed shower with horrible nerves and Roscoe is very different. Today I was in tears as I climbed into the truck with Peggy. Mom had to work and would miss a show for the first time ever. Roscoe was bathed and braided since my boss let me leave work early Friday, but he was a total shit this morning. He acted like monsters we after him and he had to protect himself by bucking. I think his hormones are at a high point right now.

Added all up, I was wondering if we would accomplish the test. We left Roscoe on the trailer until it was time to mount. Natasha came in time to help me mount. Then we made the trek to the warm up area near the rings. Morningside has a track, two dressage rings, a jumper rings and a cross country course. I saw the demise of my hard work cleaning Roscoe's legs as we had to cross a Virginia red clay puddle.
My ride time was 1103 and my warm up with Natasha was 1025. Until that time I worked on chilling us both out on the track away from all the action. We circled, serpentined and transitioned. We even managed both leads, but I was losing him out the left shoulder. I will say Roscoe had a true walk which we did not have at the last show. Natasha figured out real quick she had to keep us both busy and focused. She had us spiral and transition. That wicked left drift was still there though. To the point of him nearly running Natasha over. The other horses were distractions, but I was able to reel him back.
Going into the show area when I was on deck, I was still not sure we would get the canter. The test was icing after the warm up. Roscoe was steadier around the outside of the arena as we started our test. 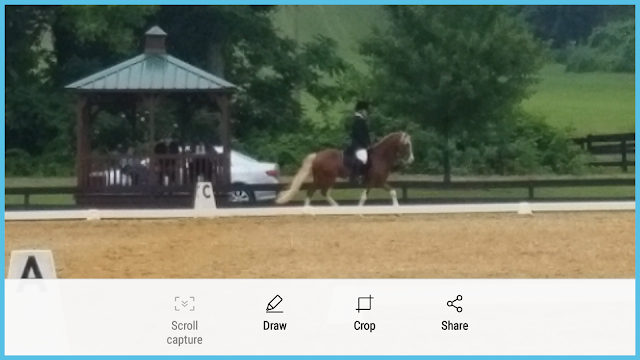 Honestly once the test began, it was a blur.

He was a bit more inverted, but his rhythm was better.

That dang right lead was slow coming and a bit of a run. I don't care, it happened people!

The downward almost had us leaving the arena with his tip to the outside. Going left, the left shoulder was still a problem. It caused us to make a smaller trot circle.

I put my inside leg on and pushed his belly over so I had a chance of getting the left lead. Luckily, the lead came easier than I thought.

The downward had the same issue nearly exiting. After that movement, I was thrilled. We actually had a free walk, where I made sure to throw my reins away.

Then our last trot was okay, but he got distracted by who knows what and we ended the test with him screaming down center line.
Did I mention this was the same judge as the last show? Yeah, I wondered how it would go. She asked for crisper canter transitions and wished he would not whinny. Uh, yeah same here. She did say his trot rhythm was great.
So here is our Intro C test:


Guys after the drama of the morning, I threw my hands up as we walked out of the arena. Natasha said "Now your smiling." Roscoe and I really wanted to go play over jumps, but we did not push it. Plus the heat was coming. Peggy and I got him settled on the trailer, braids out, sponged off and munching hay, before I made the trek back to see if the scores posted. It was a bit of a wait. They run a combined test along with the dressage only creating a scoring delay. An hour or so later, the scores revealed we had placed 4th with a score of 66.25. 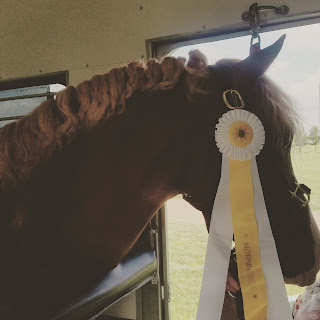 My boy and I may be able to do this stuff after all. Carpe Diem is what I told Natasha when I let her know we were showing C and I feel like that is what we did at the show.
Posted by Nicole at 11:39 PM