Wednesday was our final lesson with Natasha :( My lesson turned into a trainer ride because Roscoe was acting like a teenager. He was in no mood to bring his hind end under his back. After she worked him through his issues, I opted to let him be done rather than get on. 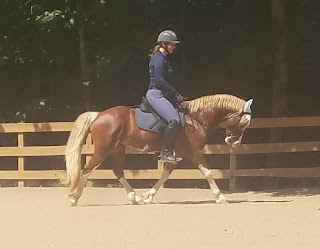 What was cool is that Natasha mentioned that someone who also rides at Sprieser recognized the Castleberry prefix. She happens to own a warmblood bred at a farm owned by Roscoe's breeder's mentor. She was really happy Roscoe was being trained by Sprieser. I did tell Natasha she nearly got Roscoe's name spelled right when she did a show recap. Though she remembered the capital "F", she forgot he has two "f's."
I was worried about having to start over and find another trainer. Or have to trailer to Sprieser for lessons. Luckily Natasha said "Got you covered." The newest assistant trainer will take us on. So fingers crossed we will click. I have not meet her yet since she was in Florida during both camps. The new trainer did say she is "Pony sized," so that should be great for having her show Roscoe.

Okay back to the lesson. Rosemary was the star of the day. No stomping, no grunting and she listened so well to Mom. They worked on leg yields and she actually did not rush them. Then Mom had a milestone and worked canter.  Natasha said she loved proving Mom wrong.

Meanwhile, Comrade and Peggy worked on leg yields too. Then Peggy got overheated. So I took over and was promptly put to work on shoulder ins. I lose Comrade out the outside shoulder so this was a way to straighten us both in preparation for canter. When we got it right, everything slowed and I could feel him carry himself on three tracks. To the left he wanted to overbend, causing a kink in his body. I had to use more right leg to move him over. Out of the shoulder in, she moved us to 10 meter circle - shoulder in- canter depart. We seriously nailed the transition a few times and one time it was exceptional. It felt so slow mo since he lifted up and pushed. It was so smooth, I was surprised. So awesome to feel! Now Natasha said I have to work towards getting that feeling on Roscoe.

Next Wednesday is the Jump Chute Clinic and the following I may try to fit in a lesson with the new trainer before the show on the 15th. Another first for me, I am bringing Comrade along for the show. We will stick with Intro B for him and Intro C for Roscoe. I have orders from Natasha to move up to Training at the next show. I am a bit in awe of what has happened so far this year. I never would have expected this outcome. My best decision this year is definitely going to Adult Camp.
Posted by Nicole at 10:57 PM

Email ThisBlogThis!Share to TwitterShare to FacebookShare to Pinterest
Labels: lesson