At my last lesson Lauren added a new challenge for Roscoe. She wanted a small canter, with him stepping under and sitting. Then she had me come down the quarter line and drift over to the rail. Roscoe said it was hard to do. He has a big block when it comes to moving sideways while still going forward. She also noticed that his balance in our little arena is not as good as when we work in Spriesers huge arena. Part of that is because I can package him better in a larger space. 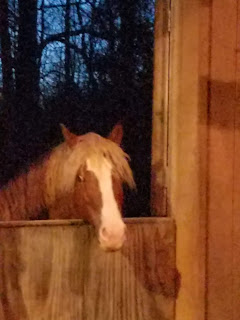 Despite our shortcomings, when we did manage the exercise I could feel how hard Roscoe was trying. These canter drifts are leading up to actual first level movements. Maybe I should look at those tests. So as we worked Lauren had us increase the angle. I had fun trying to keep Roscoe in the small canter, as he decided to just rush through. I am so glad I am taking the time this year to advance without the stress of showing at a higher level. 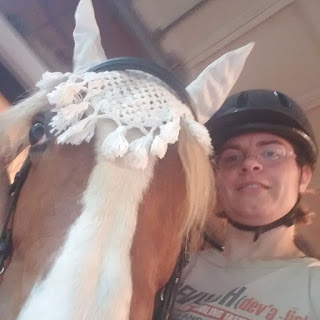 Lauren has not ridden Roscoe in the last nine months, so I told her the next time I would have her ride. I hope that she can teach Roscoe that lateral movements can be done at normal speed. She got on him Sunday at Sprieser and the fireworks flew. I expected them since Roscoe battles me with new stuff. Lauren can box him in. The hard part was that she had already dealt with a misbehaving horse earlier and seemed to take it personally when Roscoe reared and bucked. Cobs will take a lot, but they do have a sense of fairness. I did not see anything that went beyond the fair limit, but it was a battle on both their parts. My pony is spoiled by my lack of muscle and ability to push him forward. Lauren is young and thinks every horse should focus and listen to her. I would call the result a draw. Neither of them got exactly what they wanted. I win because Roscoe did learn to move forward while performing lateral moves. Plus I will totally look like the good guy when I ride him next. I only hopped on to cool him out. He did shoulder in so much easier than before. Here is a short video of them at the beginning.

I kind of want to see someone else ride him. That way I can see if he objects as strongly. I know he needs to be pushed, but I also don't want him to lose the want to learn. I will use Lauren judiciously in the future. The good news is that my new medicine should be coming soon. Then I can get my energy back and train my pony.

Meanwhile if you have not seen it yet, here is a video of Shelby. His white mark looks even better moving around.