Say Yes To The Dress

Ok I know I said the Foal Pool would be next, but this just happened so it jumps the line. Plus I needed another post because my bad news post was number 666, talk about coincidence.

Well Wednesday I had a long awaited lesson where I updated my trainer on Roscoe's issues and the need for a saddle. She mentioned that Sprieser was having a saddle fitter coming Friday and Saturday. Convientely Lauren Sprieser came in riding one of her fancy boys. She quickly agreed to fit me into the Saturday schedule. My pony is a hard fit and I really needed a used/demo saddle due to my finances. She was going to ask the fitter is she had anything close. 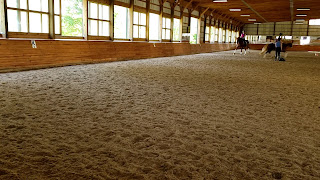 My lesson was the first time riding in draw reins. Roscoe was not sure about them, but quickly figured out he had to deal. He has a tendency to pop up in the transitions especially the canter. We worked on those with my trainer critiquing. 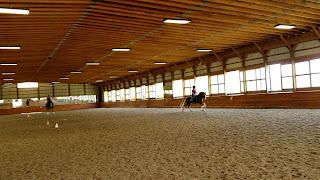 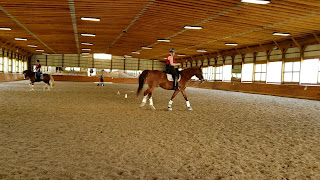 Then at one point a different voice commented that the transition was better. Turns out while Lauren was half passing she blocked my trainers view, so she filled in on the commentary. Imagine being able to ride lateral movements and assess someone else's transitions. It was a bit startling to be watched, but at least we did not embarrass  ourselves.

Afterwards I looked up the saddle fitter and the philosophy was different and refreshing. Here is one point:

The more complicated the horse’s back, the simpler your solution needs to be in order to work. Some horses are much more complicated to fit than others. In the face of weird body proportions, think sweatpants, not skinny jeans. Think generic horse- shape and please put the notion of “custom” way out of your mind.

I also figured out from the website, I would not be able to afford their saddles in new condition. No prices listed. So on Saturday we loaded a slightly confused Roscoe and went to Sprieser. He was even more confused to have his bridle on and go to the indoor, but not begin to work. He was really well behaved. It was a long process, two hours, filled with education and sinking feelings of what my pony has been going through with his current saddle. 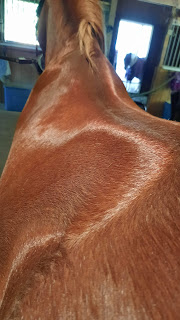 He has had a hollow spot along his back that has worried me for a while. Turns out the saddle is curved so when he tries to lift, he hit the curve and was blocked. The saddle fitter tried a bunch on but they were not quite right. Roscoe is deemed a hard fit and needed a flat saddle.

Then Lauren brought out a brown saddle which had previously belonged to a dear friend of hers who passed away. The saddle was now being sold by a former Sprieser trainer. The fitter put it on his back and said "voila." I could not believe it was close enough to ride in and try. 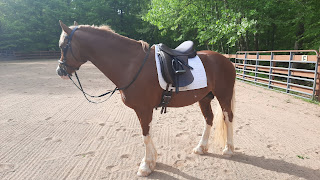 The goal is to make the saddle neutral for Roscoe, like a good pair of underwear. I felt a bit out of whack, it was a different feel. Plus my stirrups were a bit too long even though they are my normal ones. When I say the change was immediate, I mean right away in the walk it was noticeable. He was coming through the shoulder freely and stretching down. Even at the trot he stretched and was more open. Lauren, who has seen him a few times, could see the difference. At the canter, it was like a rocking horse. The fitter took some slow mo video and you could see him finally come through at the canter and lift his back. Sadly she had an iphone and could not send the video to my android.

Another telling sign of success was Roscoe stood square and did not immediately cock a leg. And he was quiet. They said I could take it for a trial, but I needed to know the price. I was having a total Say Yes to the Dress moment and worried that it would be too expensive. How could I walk away from that feeling? 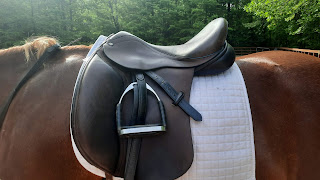 The fitter did the math and came up with a price and Lauren checked to see if I could make payments. I inwardly cringed at the price which was higher than I liked, but low enough I could swing. Once I agreed the fitter worked on fitting it to Roscoe. She does not believe he will outgrow this saddle and it comes with a lifetime guarantee. 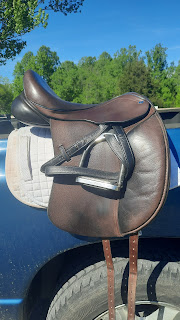 So I said yes to the 3yr old Detente Spencer for $2880. By August it will be all mine. Fortunately the Bates Isabell sold today and will cover a payment and the stimulus check will be a big help.

Hopefully Roscoe's saddle saga is over. Now to save up money for Ember and for brown tack. All my stuff is black because I am a bit traditional. But just like you don't ride the color of horse, the saddle color does not matter either. I will learn to love red on red. At least it is a darker brown.