The Saddle Made Me Do It

After I got my saddle, Roscoe was a different pony. So I had an amazing ride, the third in the saddle, and it made me feel like I could do anything. Add in the fact that the show was filling up and I took the leap and signed up for First 3. Let's not think about the last lesson where my trainer said to stick with First 2. 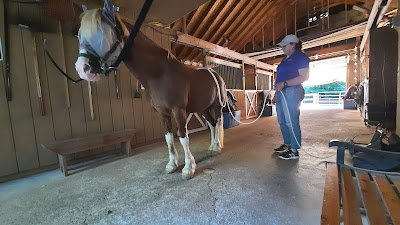 When I went to my lesson this Wednesday I told her "My saddle made me do it," when I informed her about the change. I asked for a low key lesson so that neither of us would over do before the show. Fortunately as she went about picking on my pony's transitions and leg yields, she said we would do well. Since I have no where on the property to put a 20x60 ring, except on an uphill dodging trees, we rode the test in the outdoor ring at the end of the lesson. This went surprisingly well considering it was the first time in a full size ring. I had hope.

I made a change to the saddle pad and my spurs during a ride prior to the show. FYI another benefit of the interchangable spurs, you can put a different head on each side as needed. The change helped with our yields and the pad change helped unlock his lengthenings that were sticky at the lesson. 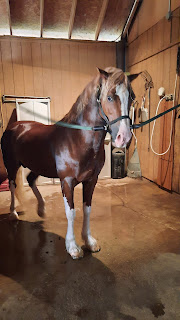 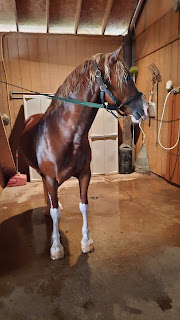 My nerves were still up and Roscoe knew something was up. I have been trying to desensitise him to the wash rack and getting bathed. He is not a fan of water. I gave him a prewash after my last ride and he was fine. Then the day before the show he got the whitening/yellow out wash. He pitched a fit, not as bad as last year, so some improvement. My boy is a total drama king, stomping his feet and posturing. 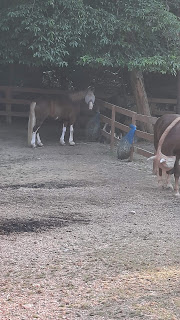 This morning we got to the barn early, why did I not ask for a later time, and set about morning chores. As the boys ate, Mom had a brilliant idea and put his halter/lead on him. No gingerbread boy antics. Score one for reducing show stress. He was not too dirty and thankfully the Wow kept his white clean with a little brushing. 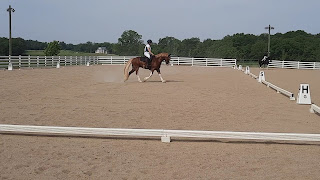 I knew I wanted about 20-30min for warm up which we got perfect. The problem was the judge was the teaching kind and took the time to talk and advise each rider. Good for a schooling show, bad for trying to time your warm up. Roscoe was full of it and he took a bit to settle. When he put himself into work mode, man he felt so great. He was the smallest in the ring, but he drew the attention of many spectators. To preserve his energy, we walked until the horse before us went into the ring. 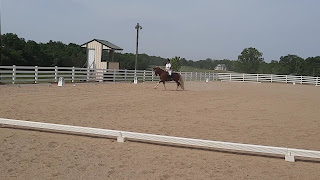 As we went around the ring, Roscoe felt focused. The judge blew the whistle and we headed to A, with a wiggle around the still departing rider. First improvement was a fairly straight halt. The second was an actual lengthening. I have to work on showing a definitive change at the end, but after last year being disappointed, this was major. Our leg yields were a weak point today, I totally syked myself out about them. Roscoe then decided that walking was optional, dang pony. Then came the canter loops which were a worry for me. Today they were more balanced than previous efforts. We actually got an 8 on our left loop. The 15m circles were tough and not our prettiest moments.  But we ended on an 8 halt.

All together the test was his most consistent to date. The judge remembered us and was pleased with the improvement. We got a 69%, which gave us second place. That walk cost us first. People kept commenting on his trot and lenthenings. We have work to do, but right now I am really happy. Now I have to figure out what test to do next month.

Speaking of next month... don't forgot to post your foal pool guesses. And come on guys are you trying to torture me with such late dates? I am impatient to see this foal.