Then it was on to my barn. I chose to ride the opinionated young girl first. She is very good at stomping her feet when she does not understand a concept.
Bending and softening while traveling straight is tough for her. Mom and I are still working through methods. On Sunday she was in a fighting mood. Eventually, I put my outside hand on the grab strap then using my inside hand I lead her head in and then used inside leg plus indirect rein to push her back into the outside. We did this at the walk. I stayed the same and let her figure things out. Light bulb moment. She softened so nicely and at one point she picked up a trot maintaining the contact. She had a nice soft, floppy neck when I got off her. Why are moments like this so satisfying with a green horse? It felt really good to break through.

Up next, DaVinci. I decided to put a saddle on him for the first time since his injury. As soon as I sat in the saddle I realized it was sitting too close to his withers. Well, he normally picks his back up after some warm up, so we headed out. DaVinci wanted  to go for a stroll around the fields which worked with the saddle situation. We had a great walk past the woodpile and the deer stands. He wanted to walk around the pond, but I had to say no because the grass was long and no way was I taking a chance with him. DaVinci was a happy pony when we got back to the barn.

If you read Saturdays post, you will remember the crazy teenagers. They were back on Sunday. At least they came after I was done riding. After I fed the horses their dinner and was getting ready to turn them out, 2 of the girls came over. "Are you leaving soon?" "Can we ride?"
Cricket, Cricket, hmm.
I took a chance and said they could ride Dottie, but I had to get on her first. Dottie was lame for a while and we gave her time off. She has been looking frisky lately so I felt safe to work her. I only rode her a short time, but she felt good. Then the girls got on one at a time. In one of her prior homes she did therapy work, so she followed me around the yard. I stopped, she stopped. Such a good girl. She even followed one of the girls around while her friend rode. I don't know which of the three was happier. I love when my horses are happy. Sugar cubes and carrots made up for being used as a pony ride horse.  A lovely end to the day... with no snow.

Today revealed 3in of snow at home, but it melted quickly. To save on gas I took a miss on riding Comrade. Mom and Dad had plans to start painting the feed room, so I went to play with Roscoe. Armed with the camera and a lunge whip I was going to get a 8 month video of him moving. I got the video, but the camera did not end up sharing it. This was not the end of the technical difficulties. Later I tacked up DaVinci and Mom led Roscoe out to the field for a lesson in ponying. He was so quick to figure out about following. Mom took a video, but the camera again rejected it. So here is the one surviving image of the ride. 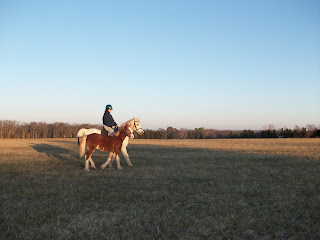 So my long weekend consisted of great rides, break throughs, happy ponies and a lot of work completed. I hope everyone else had as great a weekend.