The first possible Welsh breed show is in April. Whether we go or not will depend on money, but we still want Roscoe ready. At his age he can only do the in hand breed standard classes. Toddlers and Tiaras for ponies. Basically, you lead the horse into the arena going to the right at  a trot. Thats right the person gets the long track so the horse is not blocked. A lap around then stand in the middle so the judges can examine. Most times the judge will ask to see the horse walk and trot.  Sounds simple right?
Well we took Roscoe last year when he was 12 weeks old. He spent most of the time trotting while trying to bite me. Out of 4 cobs, including Rosemary, he placed 2nd. 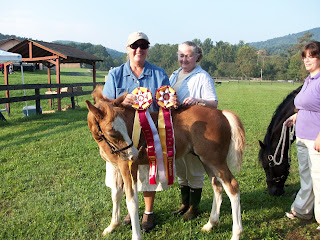 This year the goal is to have him trot on a loose leadline. We played with him yesterday and he was a star. Today we brought the camera and took him out to the big field where we ride. He acted like a tourist, but eventually he worked some. He decided that canter was more fun than trot today. The only problem is that I am 5'2" with short legs. In the end we got some nice square halts and two canters leads. Well we have time.
So have a nice laugh at our impressive boy and me trying to keep up :)