Surprisingly my mom was able to get a phone consult with our holistic vet, Joyce Harman yesterday. The main conversation point was about Rosemary's eyelid. Because of the location she does not recommend using any healing ointments. So instead we will only treat her by feeding Thuja. Luckily this can be found at the Vitamin Shoppe. We have used Thuja before for a sarcoid and had good results. If the tumor does not reappear in a couple months, Rosemary may be good to go. Only time will tell. Now we wait to make sure the biopsy does not come back with anything crazy.
Mom also talked to her about Roscoe. Basically about overall foal care. She gave us tips for when we geld him, like don't do it on a full moon. They will bleed more. She has a way of putting things that makes you go "Duh." Roscoe has been getting two feeding a day of Legends Mare and Foal food. All our other horses live on air and were only fed once a day before Roscoe came. When mom asked about feeding Roscoe, Joyce put it like this: In the wild mares have foals and those foals do not magically get to eat better or more than the other horses in the herd, so why do it in a domestic situation. See what I mean? Especially since Roscoe is a pony breed, he will be okay with only a vitamin supplement and the forage we feed once a day. We will probably finish the food we have and then reevaluate feeding for all the horses.
Next she told Joyce about Winston's carcinoma on his face. This tumor would pop up in late summer and then fade in the winter. It got really big last year and we had it biopsied. We ended up treating it with a cancer treatment cream. Now only the surgery scar is left. Joyce said she had dealt with a seasonal tumor before, so if his reoccurs she can help. Holistic treatments can take longer but be less invasive.
Finally she talked about DaVinci. The end of September DaVinci got loose and tripped and fell on his knees. 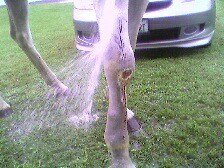 The next day he was so swollen and nearly three legged. My poor boy was miserable. A long wait for the vet revealed that it could be a possible puncture to the joint. Later we had to trailer him to the vet's for evaluation. He did have an infected joint. My lacking finances only allowed for a standing lavage, basically they stuck 12 gauge needles in his knee joint and pumped 3 liters of saline through the joint. Then they injected the knee with antibiotics. He ended up spending the night at the vets, which completely stressed him out. After we took him home he would not settle or eat. Our vet had to tube him and put in electrolytes. Ace became our friend and we reworked the aisle way so that he had a whole end of the barn for his "stall" rest. Two months later we survived and DaVinci can be ridden. The only problem is DaVinci is not quite back to normal. He has moments of hyper vigilance and gets tense. This is one of those times I am glad for my lack of finances. If I had the money he could have spent nearly 10 days at the vets. I can only imagine what his mind frame would be after that. So Joyce is sending us a Chinese herb remedy to try and help him find balance again. She also recommended that we keep Hepar Sulphur (I think this is right) on hand for future puncture wounds to help ward off infection. I would feel really bad since I think we have this in our holistic kit, but she said since it was his knee nothing would have helped.
It was an expensive call, but worth every minute. Afterwards Mom took a few pictures of the boys playing. Now I know why DaVinci comes in tired.