Intro to my Headliners

Some of you may wonder who are the two horses in my headline. They have the honor of being our first and second horses we owned. I will start with the bay, Sherman.
Sherman, a bay 15.2h Morgan gelding was the first horse my family owned. He was mom's in truth. My dad was stationed at Quantico, VA and they had a stable for military families. Mom worked for the stable. She and I both took care of boarders' horses to make extra money. While doing this she met Sherman. He was a high strung and stressed out horse at the time and would dash out the stall door given the chance. As mom cared for him, a bond grew. Mom has always had a great ability to understand horses. Eventually his owners offered to sell him to my parents. Mom was torn. He was not a family horse and had loads of baggage to work through. Plus his price of $2000 was tough for a military family of six. 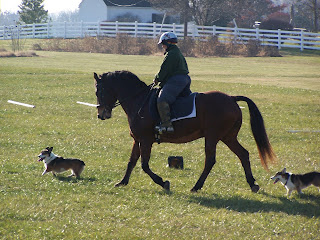 Dad worked it out and was able to do a payment plan. So 7yr old Sherman was ours. Years of holistic, chiropractic and good care combined with correct work made Sherman into a horse worth 5x what we paid. We had our challenges. He was allergic to fly bites, so we became the barn crazies that had fly sheets and boots on our horses. He also was what we called a "Stelding" meaning he acted like a stallion sometimes around the mares. Some questioned whether he had parts left behind.
Sherman always had presence. That shined through in his work. Since he was so smart, you had to be careful he did not get bored because that's when he would find something more interesting. When he became a teenager he did start to settle down. Mom was able to teach lessons on him, which we never thought would happen. His main training was in dressage, but he did compete with me in eventing and some schooling hunter shows. When my pony was injured, Sherman became my jumper. He was a blast to jump. After an unauthorized stroll with Dottie, he injured a tendon and was put on stall rest. We had to be creative to keep his mind satisfied.
In July of 2010, just over two weeks after my moms birthday, we found Sherman having violent colic. My heart just dropped. I had never seen a horse in so much pain. He looked like he had aged a decade. Our great vet rushed over and decided surgery was the only option. Colic surgery has come a long way and even though Sherman was 22 they still believed it was worth a try.
Due to the violence of his colic they believed he had a strangulation colic and chance for recovery depended on how much intestine died and whether a bypass was needed. He ended up having over 8 fatty lypomas. Where the lypomas had wrapped around his intestine was not in a good spot. His chance for recovery went down to 50%. At that time we had to make the decision to let him go. 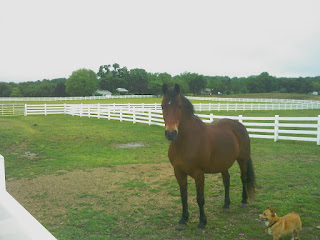 When we said goodbye to him, he looked young again. That helped to know he was not in pain anymore. We kept a part of his tail hair and settled on cremation. After 15 wonderful years Sherman was gone.
I may put up some more pictures of him when I get them scanned. It broke my heart to find I had no pictures of me riding him. We were blessed to have Sherman as a first horse. Most people do not get that lucky the first time.
Sherman proves that a horse that seems unlikely can later enrich your life beyond what you could ever imagine.
Posted by Nicole at 7:28 PM