Enter At A, Show Time 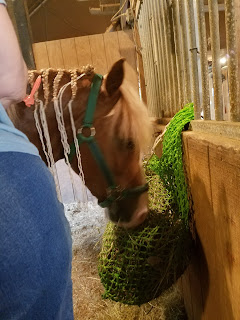 Surprise!!! Roscoe and I went to a show Sunday. It was a small schooling show about 30 minutes away. This is the series I paid for 10 dressage tests around the holidays.  After my last lesson I decided to go for it and take Roscoe to his first ridden show. I kept it simple with Intro A and B. 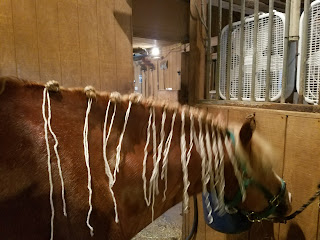 The hard part of this show was that I had no idea what warm up Roscoe would need. That is a big unknown to have, but expected. I made the decision to ride the horse I had and come what may. I did not expect Roscoe to be a "PIA" about braiding. 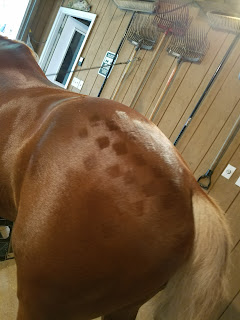 Yes, I button braided my pony even for an Intro level schooling show. Mom and I ended up double teaming him. She braided and I pulled them up. Pony boy earned my devotion by not demolishing the braids overnight. We only fixed the two we hated the night before the morning of the show. Then Mom decided to have fun and put quarter marks on him. 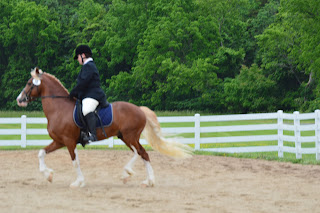 We loaded up on time right at 8 am and we arrived with just over an hour before my 950 ride time. Turned out I needed every minute of it. Roscoe was full of it. That happens when weather, work and show prep keep you from working your pony the four days before the show. Mom lunged him about twenty minutes before tacking him up. I took some deep breaths and went to mount my wild stallion. That was fun since halt was not happening. I committed and managed to mount. Immediately I felt better. I know him, I could do this. Now doing this and doing this to the same standard he does at home, yeah that was not happening. I had more pony than ever before. Plus I had super distracted pony. Roscoe noticed the horses in warm up, at the trailers and oh look, way out in the turn out.
My tools were not working, my pony did not have a four beat walk and time was ticking. Time to make the most of it. My farrier's wife is a trainer an she was there with students. She took time to try and help me by reminding me to give and take the reins. I also tried to remember  to keep my leg on and shoulders back. Even as I could tell this was going to be a tense, quick test, I appreciated that Roscoe was pretty obedient. He trotted when I asked, walked within a few strides and tried to turn when I said. I had to deal with the lovely bulge out the left shoulder. For some reason he wanted to go towards the show ring. 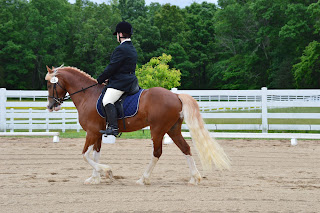 Of course when our turn came, he inverted as we rounded the arena. One lap around and it was time to enter at A.
My perspective:


Trot in was active and slightly inverted. I dreaded the walk transition. We walked, sort of and then we trotted off well. 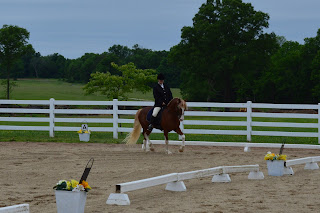 Then I got lost. Score one for not realizing it was a big arena, so my 20m circle turned into an egg shape. 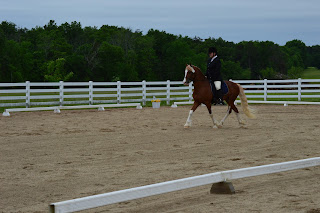 Across the diagonal, I felt like he was going to take flight. Next circle was better once I kept him in the arena. The walk transition happened, the free walk did not. It was a drunken line of near jigging. I did not give away the reins since I know him and it was not there. The last medium walk was good, the final halt not great. I knew that would happen since I get the same at home. That was not a battle I chose to address for this show. We finished, I was happy. 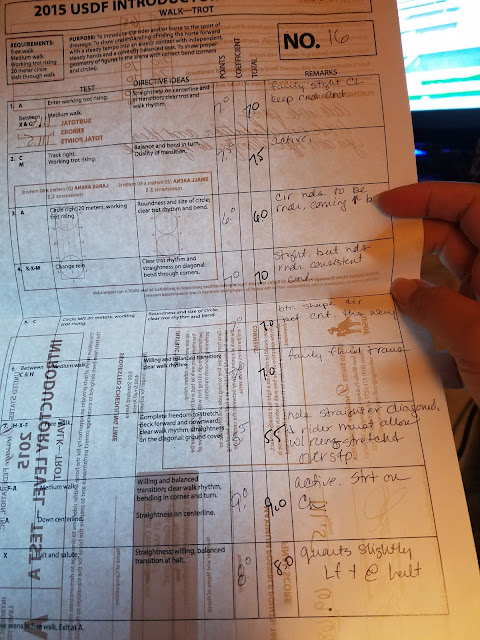 But the fun was not over, as we talked to the judge, Roscoe was dancing in place. Mom said he wanted to piaffe. Then he upped his game with a levade. All I could think was "please don't land on the drain pipe arena and scare yourself." I turned him left and calmly apologized to the judge. She said that he when he was on the bit, he was on the vertical and not behind. Seriously, I was just glad to finish with some decorum.

I literally had the length of a Training level test before my next test. Yeah, not improving. In fact it got worse. Roscoe thought he was done, and some of the horses that warmed up with us left so he was really distracted.


That crazy bulge out the shoulder appeared during both circles. I purposely was late halting both times to have time to bring him down. I'll take the loss of points. Roscoe inverted more, but again we finished. No rearing this time at least.


Sadly, no video. It would not be a show if we did not have a media malfunction by Mom or Peggy. 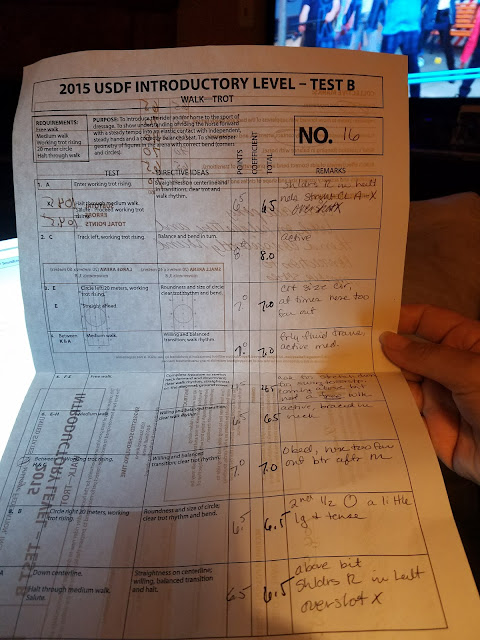 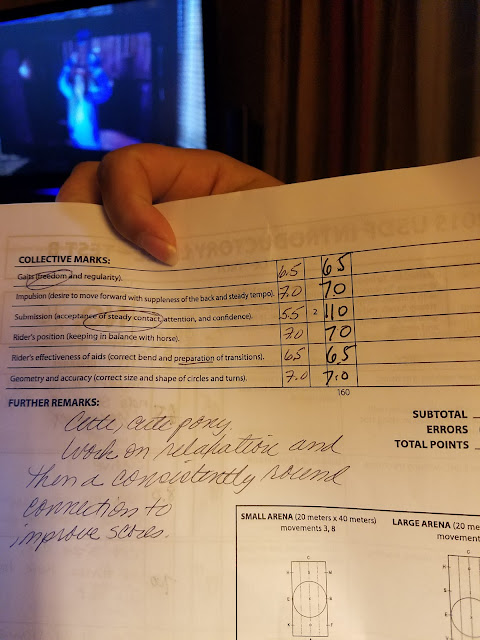 Well in the arena. I made him walk around the warm up area until I could walk on a longer rein with out him trotting. At one point he reared again. Again I just turned him and moved on. Luckily he finally settled as a bunch of little kids came in. Riding a stallion comes with the responsibility of staying aware of your surroundings and knowing your limits. Roscoe halted, for real, and I ended it.
So pony boy needs to relax and not look so short in the neck. That will come with exposure. Overall to me the show was a succes.

I waited for my tests and figured we would not place. Eleven riders were doing the tests. They split the group though so we had a chance at a ribbon. When the tests were placed for pickup, I started at the bottom and went up. Surprisingly, Intro B was second place and even bigger surprise Intro A was first place.


It has been a long time since I showed, but the scores seemed too high, A 69.687, B 65.312. That may just be my biased opinion since I know my pony can to better. We have things to work on and hopefully next time will be smoother. Though according to the people that watched us, I lied really well. They thought I was cool and in control and much younger than I actually am. Ah if only they knew the litany going through my head...
Posted by Nicole at 10:53 PM