Between work and the weather, I have not been riding consistently. And with a lesson coming this week that is not where I wanted to be. Anyway, I do what I can. Keep sending entries for the Foal Pool! Make sure you specify your chrome guesses. Oh and due to work the only Rolex I saw was Rosemary's new nephew. He is the first for Castleberry's Jr Stallion.


The work week was one of my odd day/hour ones and kept getting worse. We finally told my boss to stop saying "It can't get worse" because fate was showing her it could. During my last work day on Saturday, I got an email on my phone from the lady at the old barn who I trim her horse's feet. I just trimmed Jenna last weekend, so I could not understand why she would be contacting me. 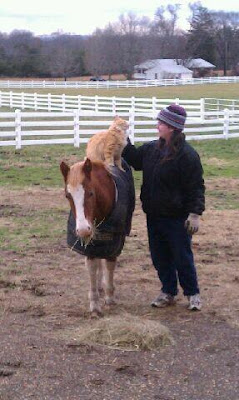 The preview was "...She asked me to contact you about Bailey." That had me worried. Bailey is the oldest barn cat at the old barn. He was there before we came. He was Roscoe's first rider and always happy to see us. I figured maybe he passed. Sad, but not unexpected at 15-16 years old. What followed in the email was worse than death.
Poor Bailey was being blamed for every injury the other cats sustained and the fact that a recent drop off cat was killed by crossing the road. The owner of the property said she was bringing him to the shelter unless we came and got him. Seriously, I was appalled. We almost took Bailey when we left 2 1/2 years ago, but that was the place he knew. Now we are put in the position to uproot the poor guy and turn him into a house cat.
There was no choice. No way was he going to a shelter to die alone. We had to help our old friend. I told her we would get him on Sunday and to secure him in the barn. The owner called me Sunday to say he was secure and to go on about how mean he is. Then she told me that they let him in the house. Why would you let a "mean" cat in the house? I think she wanted me to make her feel better, but that was not happening.


We picked up Bailey and were making our getaway, when we were stopped by the owner. She was questioning whether he should go and if he would be alright. Too late, I was done playing games. He is too old to be yanked around and who knows if she would let us know the next time. We had to tell her he was going to our house. I hated even letting her know that, but I wanted to drive away even more. 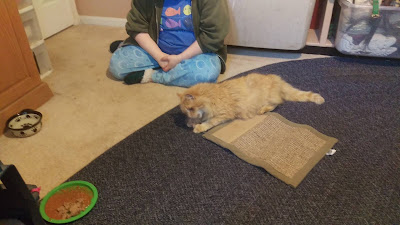 Unfortunately, we have a 15yr old cat at home. This means until Bailey is cleared by a vet, he has to be separated. The good news is that it was the impetus to clean up the horse room to give him space. We used old horse blankets to cover the couch, bought him a new litter box and a scratch pad. He sticks to you like glue when you visit and makes it very difficult to leave. Hopefully since he was an indoor/outdoor cat at the beginning of his life, this transition to complete indoor will go okay. Soon we have to try and shave off some bad mattes in his fur and clip his nails. Once he is cleared medically, we will look into a screen door to introduce him to our cat, Nia.


It makes me heart sick when people treat animals as disposable, especially the older ones.
Posted by Nicole at 4:29 PM