For a while now, Peggy and I have been trying to get together and ride. Weather, work, and lost shoes have all impeded that goal. Yesterday we finally managed a ride. We tacked up Comrade and Addie (her cob mare) and went for a trail ride. Comrade and I tried out a few new jumps she had built while Addie watched. Typical male, Comrade always tries to show off when Addie is around. So we had a short, but great ride in the woods. We did not do much since Addie is out of shape. As we walked back to the arena, Comrade was jigging underneath me and posturing. Did I mention he is a show off?
Any way once in the arena, I had Peggy ride Comrade. She has not ridden him in a while so it was great to see her on him. Comrade likes me, but Peggy is his person and the only opinion he really cares about. As I stood watching them both, I felt a moment of pride that the work I did with him was transferring to Peggy. She mainly walked, but at the walk she asked him to do quarter turns on the forehand and haunches. Comrade did as she asked while maintaining a soft contact. When she did ask him to trot, the jigging pony from my ride, felt her hesitation and did a quiet jog. Happy pony and happy owner.
Comrade did remember that I had sugar in my pocket and made sure after Peggy praised him that I gave him his due.
On facebook this morning one of my friends shared this picture. The saying says it all. Enjoy :) 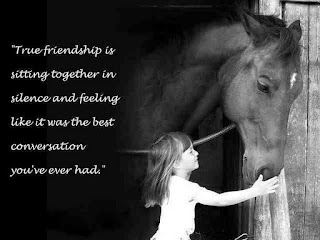