Clinic day finally arrived despite a snow storm and getting sick.
I crawled out of bed and left by 6:30 so we could head to Peggy's. Peggy had the truck loaded and the pony brushed. At this point I was not sure I would be able to ride since as Peggy's husband described I looked like death warmed over. Felt that way too. Well I had a hour and a half drive to feel better. Armed with Ginger Ale we loaded up to go to Morven Park.
We conveniently pulled in just behind the clinician. She was very friendly and let us walk Comrade around the indoor before the first lesson started. He looked around at the jumps and bleachers, but it was the mirrors that really caught his attention. At first he called to the pony in the mirror :) Then he kept looking at himself. 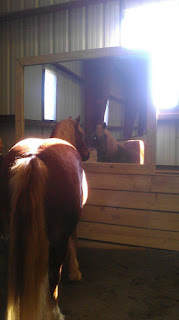 ﻿
Every time we rode by the mirrors I caught him checking the view. I just laughed. As for the indoor, he was perfectly happy inside. We warmed up in a smaller ring next to the one with the jumps. He was soft and long, which worked for me since I was not all there. After a great warm up we moved into the other ring for the clinic.
Yvonne was impressed with Comrade, size and shape wise when she saw him walking the indoor. She said "I could fit on him." Then she was impressed with his trot. He did have a great trot, but it was not his best. I had already told her about our canter issues and Comrade decided to show her that his right lead is his bad lead by not picking it up. We did eventually get to show canter and get her opinion. She believes he is not balanced or aware of his body at the canter. I agree. She worked a little flat work focusing on fixing my issues which will help him. His actions are causing me to fall into bad habits. For example my inside hand tends to cross the withers when he leans. I really have to recognize when he drags me away from inside leg to outside rein.
As we moved onto a jump exercise, she stressed maintaining my dressage during the jumping. Flat work can make or break jumping. That turned my head. It is a philosophy I have long believed in and learned eventing an older horse. She started simple, 3 nine rails then to a small "X." Comrade drifted but never looked twice at the jumps. She told me to keep him straight and let him figure it out on his own. He surprised me because he did not get excited or strong at all. Quiet and jumping are not normal descriptions for Comrade. He did keep a nice rhythm and took most of the jumps in stride. Nothing horrible, but nothing awe inspiring either.
Comrade learned a big lesson though about wooden poles. THEY HURT! He did his normal lazy jump and took down a vertical. The weight of the wood made him think twice. He is used to the PVC poles at home. Yvonne highly recommended using wooden poles with him so he learns to respect the jumps. We ended with a baby course. The good, bad and ugly are in the video.
So in the end,
Comrade handled the indoor like he always worked in one.
We found out he likes to watch himself in mirrors.
Comrade needs wooden poles
He needs short correct sessions of canter to get him using his hind end.
She recommends cross rails to help with his straightness
We are on the right track with his training. Her thoughts reflected ours in a way we don't see often. It was refreshing.
And the biggest thing I learned, Comrade was taking care of me. I have seen him do it with Peggy. He was really careful and quiet today because he knew I did not feel well. I was worse off than I thought.

Overall the clinic was totally worth it and Comrade showed a new level of maturity. And even at my low level of functioning we still had a great ride.
Posted by Nicole at 10:46 PM