"Step on a Crack, Break your Mother's Back"

Anybody remember this childhood game? We played this in hallways that had the 12x12 tiles or on sidewalks. Real easy, don't step on any cracks.
How does this pertain to horses? you ask.
Well it seems Roscoe learned the rules. So when we went for a stroll on Saturday and he spooked at a small patio of pavers, I worked with him to get him to step on the patio. After a few discussions he put one hoof on a paver, then later we got two hooves. At no time during all the time we worked did he step on a crack. He really thought it was not right to walk on those pavers.
Today we went over there again. He was still not sure about the pavers, but it took less time to get him to step forward. Roscoe was willing to eat the grass growing between the pavers though.

I ran out of cookies so the session had to end. He never had a big blow up or was really stupid. Pretty good considering the dogs were playing in the leaves, Rosemary was calling, the wind was blowing and there were big orange cones on posts right next to this spot.
Roscoe finally joined the other horses in the tail bag fashion. We had to order new tail bags because our old ones went missing. I have no idea where they could have gone, but with the mud I could not wait for them to appear. I think Roscoe's butt looks really with his tail bagged. 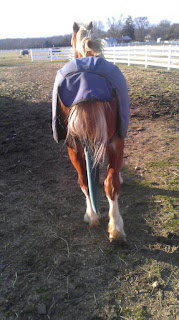 And just because he is so cute... 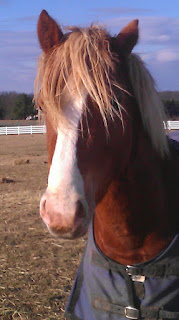