Ah, Back in the Saddle

Today was a long day that started early. My mom had to work today, so we had to plan an early trim appointment for the appies. Luckily they decided to cooperate and their trims went smoothly. Then I had a little time to get my horses fed before my farrier came to do Dottie's shoes. While he was there, I had him look at Roscoe's feet to get guidance on trimming those baby feet. It is nice to be able to reassure myself that I am not messing up his feet. Hoof care done for the day.
Next, I just had to ride. 50 degree day and only a little mud meant riding was a must. But who to ride? I looked over at DaVinci, normally my first choice, but he had a leg cocked and was sleeping. Too windy to ride Winston. Dottie is still on R&R, so Rosemary it was. I chipped the mud off. Thank god for blankets she was clean underneath. Rosemary stood by the mounting block, a good start. Then we started walking out to the field we ride in. Rosemary decided that she wanted to go down a hill to a part of the farm she has not been to yet. Well she was not thrilled by the pile of old logs. We got bulge out the shoulder and ignore the rider each time we went by the pile. Not happening. I ended up doing circles by the piles until she decided to remember she has a brain. These are the times that I remind myself she is only 4yrs old and really green. It is always a challenge for me to find ways to teach her what I want. The tricks I use while riding DaVinci or Comrade don't work with her because she has no clue. Today I just tried to stay consistent asking her what I wanted, then just let her figure it out. We worked for about 45min with okay results. I at least burned some that crazy cob energy. 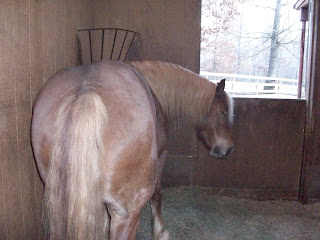 Then it was onto the next cob, Comrade. He was a mud ball. His owner and I double teamed grooming to find the pony. We were both amazed at how long his mane has gotten. If a horse can grow a great mane I am all for it.
I basically just put Comrade through his paces. Peggy, his owner, took a few pictures with my camera, then she played with her new camera. Comrade and I had to deal with Shadow the german shepherd. Shadow follows us and then decides to go in front. Someone really needs to tell him that Comrade is much bigger and can run him over.  So here are a few pictures from the ride. 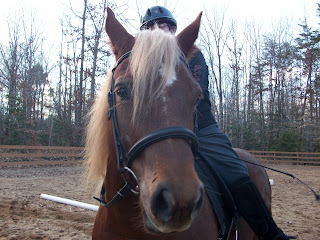 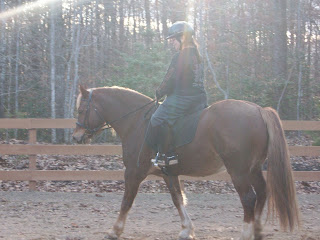 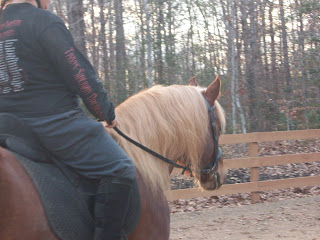 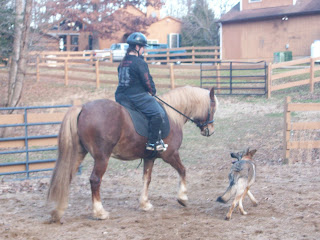 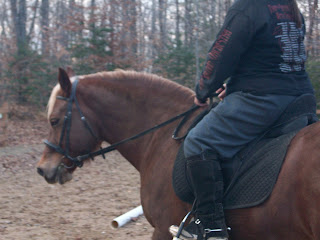 After my ride, it was back to my barn to feed dinner and help my dad with the feed room renovation. We now have new walls and a ceiling. Next he has to put the counters and cabinets back in. I will post before and after pictures when it is all finished. Now  lets hope tomorrow goes as well.
Posted by Nicole at 1:02 AM