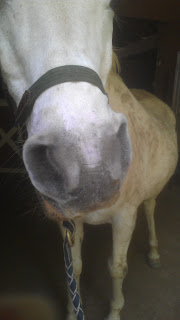 Today that statement came into full force. My mom and I were cleaning stalls and Peggy and Larry were getting ready to go to town. DaVinci every morning and afternoon walks around the aisle, out by the red boys and in Sonny's stall. He nibbles grass along the fences or hay in the stall. Well he came in after nibbling out by the red boys to eat hay. I saw him ruffle through his hay, but not really eat any. Red Flag #1. 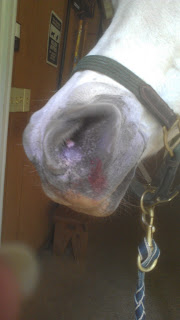 Then he walked toward me and the face I know so well, was not quite right. He was uneven in a way that bothered me. Red Flag #2
DaVinci is not a cuddlier nor an attention seeker. Normally he mostly wants you to scratch between his back legs. He came up and put his head by my chest. I noticed a spot of blood on his right nostril. Red Flag #3 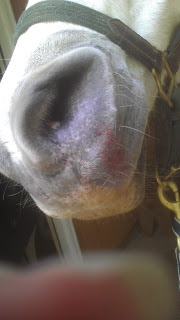 Seriously, my trouble radar was starting to blare. I thought he had had a stroke at first. Then he went into the stall I had been working on and tried to roll. I nabbed him and called to mom. I moved him to Sonny's stall and he again tried to roll. I was worried he was colicing.
Mom gave him a dose of Pro Bi which was difficult since he did not want her touching his face on the left. By this point the uneveness that struck me wrong earlier was increasing... due to swelling. 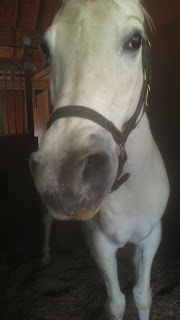 DaVinci was in intense pain and kept asking me to make it better. I stayed with him while Mom looked at our homeopathy supply. We went on the thought that he had been stung. So Mom dug up Ledum, good for bites or stings, and Arnica for his pain. She placed the pills under his lips so they could dissolve. We tried to feed him, but the barest touch on his face caused him too much pain. Fortunately, he did have gut noises and he regained his balance when his tail was pulled at the walk. So no colic and no neurological. Now we just had to watch him and make sure he did not stress himself into a colic. DaVinci chose to stand under the fans with access to the other horses. Mom and I continued to work and poor DaVinci continued to swell. 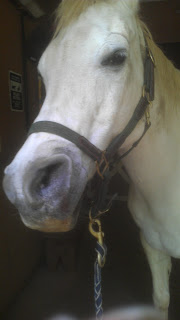 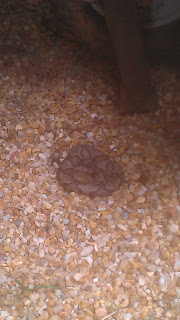 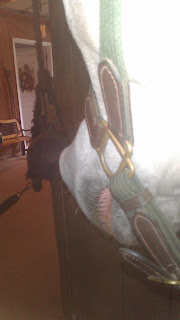 Then we got a surprise when Mom went to get a wheelbarrow. Resting in the pea gravel was a copperhead snake. The area had a touch of grass near by and is a known spot for DaVinci to nibble. His situation took on a different view. We called the vet right away to see if we needed a visit. The vet said that she did not need to come and to give him Zyrtec and Banamine. He could get an infection from the venom causing the skin to slough off, so we will have to watch. We gave both to DaVinci orally and soon with all the pain medicines he started to feel better. I took a handful of cookies to him and with care he was able to eat them. I had to push them in the side of his mouth to avoid his sore spot. After he ate those, I got a scoop of senior food and began to hand feed him. DaVinci ate the whole scoop and even began to lip it up himself. So then I grabbed the hay cubes that would have been his breakfast and hand fed those to him. I have never been so glad to see a horse eat. We worried about him getting the medicine on an empty stomach. I told mom we needed to chop up some of the really soft grass hay we had for Sonny. 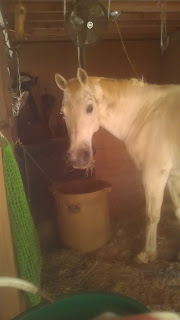 As soon as DaVinci saw the hay he began eating it, though in a guarded fashion. Even better was when he was able to eat his dinner out of his bowl. Now he could not clean it, but it was a huge step. We felt better leaving him for the night. Peggy will go give him another dose of Banamine soon.
Hopefully, he will continue to improve. And hopefully that snake will not make another appearance. I am so thankful DaVinci could tell me something was wrong and I knew him well enough to listen. That is priceless. Hug your horses people!
Posted by Nicole at 12:08 AM