Hey it looks like we might get a Mother's Day baby, maybe. And if your keeping track it is not who you would expect. We seem to have skipped Rosalee and moved on to Rosina. So fingers crossed!
As I was writing this I got a text saying "It's Happening!" So far it is another big chestnut with daddy's blaze and definite chrome on the legs. A GIRL!  I will write up the details later today. 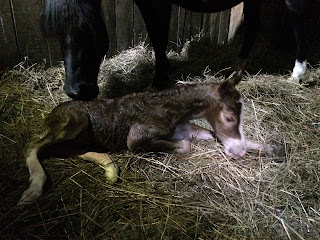 Meanwhile, I finally got back in the saddle after our marathon of rain. I recently got a used full cheek happy mouth mullen for Roscoe and I wanted to try it out. Once I chipped my boy out of the mud, yay fun times, we headed to the arena. It took awhile to get him focused because the neighbor used the arena earlier and her mare left a pile behind. Roscoe was more interested in checking out her path than listening. I  worked him through it and evil mom that I am, made him go into the huge puddle. I told him if he was going to be an eventer, he had to play in water. Considering he has not worked in over a week, he was super.
The second half of the ride, he remembered how to focus and began reaching into the contact. He is improving at multi tasking since he is not slowing his trot as he reaches. The full cheek and the fact that the bit is the right size helped when I worked on his turn on the forehand and haunches. Amazing how the right tools make a difference.

Roscoe decided to try a new mane and feather color. I told him blondes have more fun, but he was determined to try being a red head. I can't say I approve of his choice of color, Virginia Red Clay. The ride through the puddle did clean his feathers though.

Great news about the next baby since Baby D is harassing his Mom. Plus Lisa told me he has a belly spot near his front legs. He also has great balance. Click the link to see the video that goes with the rearing picture :) 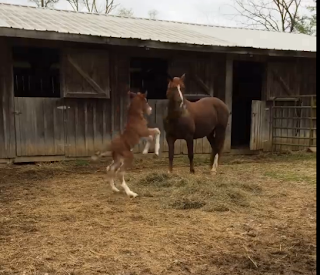