Monday I went to the specialist and finally got a thorough exam of my hand. It has been getting better in the two weeks before the appointment, but I still wanted a professional opinion. The doctor tested my grip, range of motion and manipulated it until he narrowed down the point of pain. That point was the upper right area of my middle knuckle. He looked at the x-rays and did not see any break, so that was a relief. He believes it is a deep bone bruise and will take at least another couple of weeks to heal. I can handle giving it time and am relieved it is not anything major. Now I need the rain and storms to stop so I can get back to riding.
My injury definitely drew attention to the fact that Roscoe needed his boundaries reestablished. What he and Comrade do together is between them, but if a person is present they need to give space. We began by moving him around when we went out in the field. I worked with him to keep his distance while I am dealing with Comrade. Comrade is not always cooperative. With very few sessions, Roscoe figured out that he had to give at least two lengths between him and Comrade if a person was present.

He also applied that lesson to the horses on the other side of the fence when we lead them to the arena. That was a spot where he tried to lean on the fence to get to the horses. I was really pleased that a simple "SHCH" noise will back him off two fence posts. Peggy and Mom both need to work with him since he will test anyone. The pony needs to know safety comes first then I will give him some love. He is so smart though and reads body language really well.


Baby D is showing a lot of Roscoe when he was that age. He needs a buddy soon since he is frisky. Come on Rosalee! 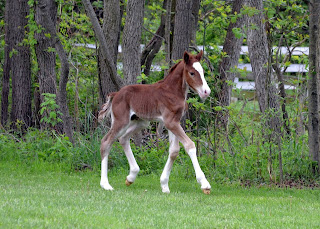